Tagle recalls marching in US snow during ’86 Edsa uprising 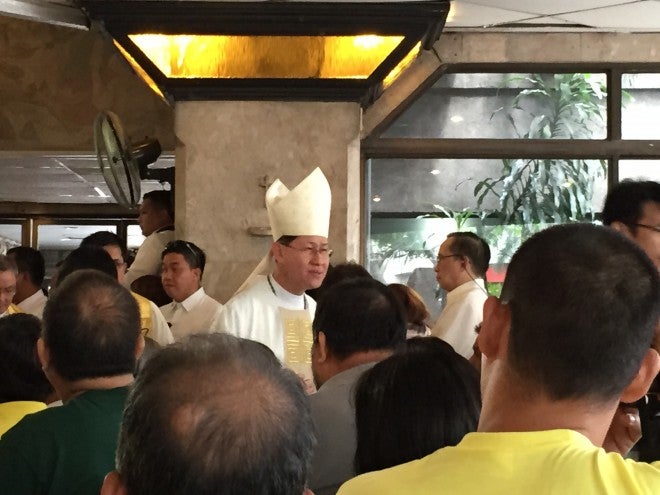 MANILA, Philippines — He may not have been in the country as Filipinos linked arms and blocked tanks along Edsa, but Manila Archbishop Luis Antonio Cardinal Tagle felt just as enraged and inspired as he marched in the snow while studying in the United States.

Tagle recalled that during the people power uprising that overthrew the Marcos dictatorship in 1986, he was studying in Washington, DC.

He said he was often teased for being absent during Edsa I.

“E wala ako dito pero doon winter ‘yan, nage-Edsa din kami doon sa tapat ng White House (I was not here but it was winter in the US and we were also ,” the cardinal told Filipinos attending a mass at Edsa Shrine on Wednesday.

He said the participants, including former Senator Raul Manglapus, went on with the marches despite the cold weather.

Not just a place

Tagle even wore an “I was there at Edsa” shirt, which left him shivering in the cold.

Although he was not able to return home, he told others that he was indeed at Edsa during the uprising.

“Kasi pakiramdam ko noon lahat ng Pilipino nasaan man sila ay nasa Edsa (Because I felt at that time that all Filipinos, wherever they were, were also in Edsa),” he said.

“Edsa is not a place. If you love your country, you are in Edsa,” he explained in Filipino.

Tagle said Filipinos were so popular at that time and everyone treated them like family.

At one point, his professor brought wine and cheese to class and told his classmates that Tagle was a Filipino and that everyone should express solidarity to their cause.

Tagle officiated the mass at the main chapel of the Shrine of Mary, Our Lady of Edsa on Wednesday in commemoration of the 29th anniversary of the Edsa People Power Uprising.

It was in the Catholic University of America in Washington that he earned his doctorate in Sacred Theology.