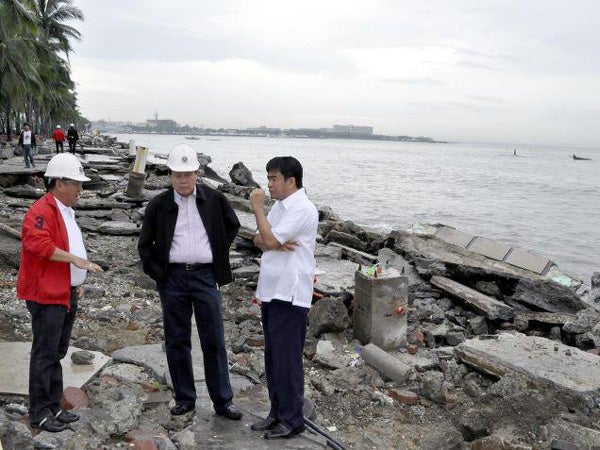 DEFYING GRAVITY? The alleged “floating-on-air” photo release showing DPWH officials inspecting Roxas Boulevard in the aftermath of Typhoon Pedring. It was pulled down from DPWH Facebook account after two minutes, said DPWH public relations officer Andro Santiago and apologies to the public had been made. Photo taken from http://quiapo.wordpress.com/2011/09/28/dpwh-photoshop-fail/ 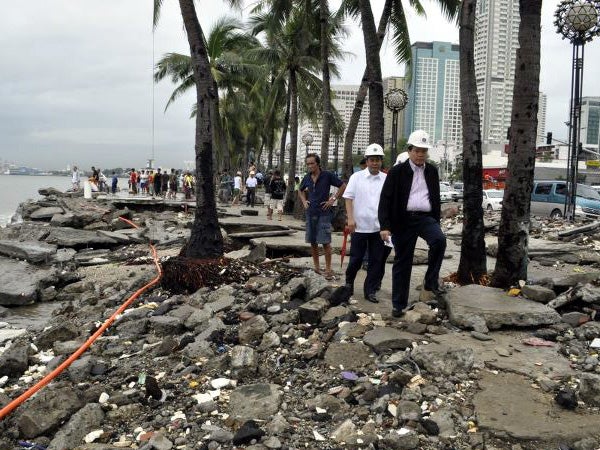 MANILA, Philippines – A photo release of the Department of Public Works and Highways last Wednesday posted on a social networking site meant to show their officials conducting field inspection after the onslaught of Typhoon ‘Pedring’ (international codename: Nesat) drew a barrage of criticisms in cyberspace for having been allegedly “Photoshopped”.

The photo made them appear to be standing over what was left of the seawall which shielded Roxas Boulevard from Manila Bay’s waves.

But instead of being appreciated, the photo only gained disapproval from those who saw it, pointing out that the three officials seemed to be ‘floating’.

Comments on the post criticized the DPWH for ‘faking’ the documentation of their work in order to make them look good to the public. Those who wrote comments also expected the department to apologize for the edited photo, stating that there was no need to even edit a photo if it truly showed officials hunkering down to work.

Beth Pilorin, chief of the DPWH Public Information Division, posted an apology at the department’s Facebook account on Thursday, saying the photo “was not cleared yet before the staff posted it. It was already replaced.”

DPWH public relations officer Andro Santiago told Inquirer.net over a phone interview that the photo had been posted by mistake as they were also preparing the layout for a magazine they circulated in the DPWH.

He said the images of Momo, Tagudando and Macud had been cropped from a photo and laid on top of another photo to form the image which sparked criticism online. “It was a cropped photo (of the officials) showing them in another angle,” Santiago explained.

He maintained that it was not the DPWH’s intention to fool the public by posting an edited photo of the inspection, adding that the minute they realized the mistake, they immediately replaced it with the official photo release.

“Walang Photoshop at hindi naretoke” was his description of the official photo release.