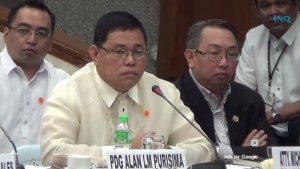 It emerged on Tuesday that resigned Philippine National Police Director General Alan Purisima was the “overall commander” of “Oplan Exodus” and he took responsibility for it at the conclusion of the Senate inquiry into the Jan. 25 massacre of 44 Special Action Force commandos. INQUIRER.net FILE PHOTO/Ryan Leagogo

MANILA, Philippines–It emerged on Tuesday that resigned Philippine National Police Director General Alan Purisima was the “overall commander” of “Oplan Exodus” and he took responsibility for it at the conclusion of the Senate inquiry into the Jan. 25 massacre of 44 Special Action Force (SAF) commandos.

But even if Purisima acknowledged he called the shots on the botched Mamasapano operation, he also said he delegated the authority of the police project to the SAF commander, Director Getulio Napeñas, including coordinating with the Armed Forces of the Philippines.

Napeñas, however, did not allow Purisima to get away with this and turned the tables on him. The fifth and final hearing of the joint Senate committees investigating the Mamasapano incident highlighted unexpectedly what appeared to be a rift now between Napeñas and Purisima.

Legarda asked who should be considered the “head, the commander or person responsible for Oplan Exodus.”

Gen. Gregorio Pio Catapang Jr., the AFP chief of staff, replied that there was “still a lot of confusion about who initiated the order to launch” the operations. Catapang said he would leave it to the PNP to say so.

Legarda asked Purisima the same question, noting that Oplan Exodus was initiated during his term of office and that he acknowledged meeting President Aquino about it on Jan. 9, when he was already suspended by the Office of the Ombudsman on corruption charges.

“Your honor, responsibility and accountability rest on me because I have delegated authority to the director of the SAF but the planning, direction and execution was delegated to the SAF director,” Purisima said, referring to Napeñas.

Defense Secretary Voltaire Gazmin agreed that the head of the operations was indeed Purisima.

“I wish to add that precisely whether it’s advised or ordered, there was an overt effort to keep us away from the OIC PNP and the SILG,” Roxas said, referring to himself and the PNP officer in charge, Deputy Director General Leonardo Espina, who were only informed about the operations after the SAF had already attacked and killed Marwan.

When Legarda asked Napeñas, pointing out that Purisima had delegated the authority to him, the sacked SAF commander took responsibility for it as ground commander of the operations.

“I am the one responsible for carrying out the operation plan,” Napeñas said. But he took exception to Purisima’s statement that he had delegated authority to him for the operations.

Napeñas said Oplan Exodus “emanated” from the intelligence packet given to him by Purisima when the PNP chief called him for a meeting on a Sunday night in November last year.

Legarda then asked whether the President had instructed him to coordinate with the AFP. Napeñas said Aquino did make a “comment” about it in the Jan. 9 meeting in Malacañang and that the instruction was clear to him.

But when asked if he did coordinate with the AFP since Purisima did say he had delegated the authority to him, Napeñas said: “I wish I would be given that authority, otherwise I would be bypassing the PNP OIC.”

He also reiterated that Purisima told him to keep Roxas and Gazmin out of the loop in the meantime and that he would take care of coordinating with Catapang.

“Without this statement (from Purisima), I would immediately go directly to the OIC PNP who has that line to coordinate directly with the chief AFP,” Napeñas said.

Legarda then asked Purisima if the President’s order for him and Napeñas to coordinate with the military was clear to him.

But Purisima said that it was clear from earlier meetings they had with the President that they would have to coordinate with the military.

He said that during the AFP anniversary in December last year, he brought Napeñas along to speak to Catapang so they could talk and coordinate initially on the operations.

Purisima said it was his “understanding” that Napeñas would be the one to coordinate with the AFP.

Concluding the four-hour hearing, Sen. Grace Poe, chair of the joint Senate investigative committees, said she would come up with a report that would, among others, contain findings of those who could be held culpable and liable for the operational lapses.

During the closing of the Senate inquiry, Poe said the five hearings focused on the “undeniable lapses in the conduct of operations leading to the 44 deaths of the PNP SAF.”

“It appears that the operations were poorly planned from the very start. To make matters worse, there was an undeniable breakdown in both leadership command and control in the PNP. Information on the Oplan Exodus was withheld from the secretary of the interior and local government and the officer in charge of the PNP,” Poe said.

She said it was clear from the hearings that the PNP did not coordinate with nearby AFP units until the 84th and 55th Special Action Companies were already involved in heavy fighting with hostile forces.

Poe said the committees would propose legislative actions “necessary to avoid a repetition of these incidents in the future.” The committees will also make recommendations for the proposed PNP modernization program.

Finger-pointing between the PNP and the AFP emerged during the Senate hearings and this became palpable on Tuesday after Poe asked Napeñas if he would like to acknowledge for the record the military’s role in the rescue of the besieged commandos.

“They gave us a big help,” Napeñas said, and thanked the AFP brass.

Guerrero said he would like to thank the SAF for acknowledging that the AFP also helped them and admitted somehow this had eased hurt feelings. But what he could not accept was that Napeñas thanked the AFP but at the same time was still blaming the military for the death of the 44 SAF troopers.

“That hurts,” he said. “But, just the same, thank you, Sir, for recognizing the little effort … but for me, all the efforts were given and done in order for you to be helped in spite of the things you’ve done, not coordinating with us,” Guerrero said.