Revilla denies visiting Enrile but is mum on photos 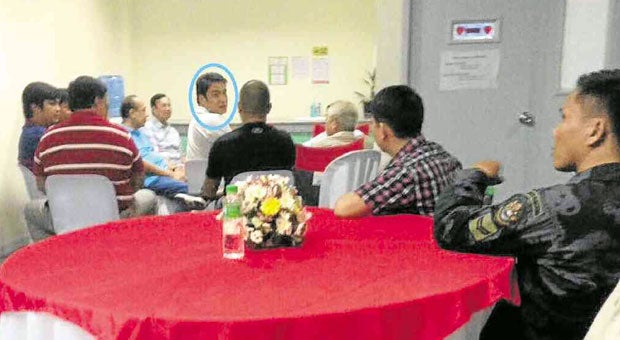 Detained Sen. Bong Revilla on Monday dismissed as “baseless, malicious and outright lies” the claims of government prosecutors that he attended the birthday celebration of his fellow detained lawmaker, Sen. Juan Ponce Enrile, on Feb. 14 at Camp Crame.

But photographs appear to tell a story different from Revilla’s version.

The senator did not comment on the two photographs that the prosecution had submitted to the Sandiganbayan Fifth Division in opposing Revilla’s request to undergo medical examination.

The photos, taken by a person who was also present at Enrile’s 91st birthday celebration, showed the two senators sharing a table with several others.

In her Feb. 18 column “From Both Sides Now” in Manila Bulletin, Milwida Guevara, a former finance undersecretary, claimed to have seen Revilla at Enrile’s birthday celebration. 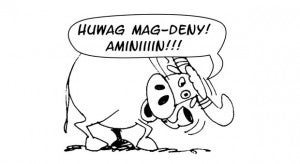 “Revilla was only allowed to stay for a few minutes,” said Guevara, CEO of Synergeia Foundation and a faculty member at Ateneo de Manila University School of Government where she teaches public finance.

In a statement, Revilla maintained that he was taken by the personnel of the Philippine National Police Custodial Center in the afternoon of Valentine’s Day after he experienced “cold sweats, stiffness and pain on the back [of] my head and neck.”

The senator said that he also had an episode of “debilitating migraine attack” and that his blood pressure had suddenly gone up.

“Reports that I was sneaked out by PNP personnel from the PNP Custodial Center are absolutely false,” Revilla said.

“It is not true that I was at the hospital to visit Sen. Juan Ponce Enrile. I did not go to his room as I did not even know where that was. Reports and assertions to the contrary are baseless, malicious and outright lies,” he said.

Director Joefferson Toribio, a member of the Ombudsman prosecution panel, said Revilla’s presence at Enrile’s birthday party was a “serious violation of the court’s order.”

He said the antigraft court specifically directed the PNP not to “allow the accused to be moved, removed or relocated until further orders from the court.”

“We are really puzzled why he was photographed inside the room of Senator Enrile with his sons on Feb. 14,” Toribio told reporters. 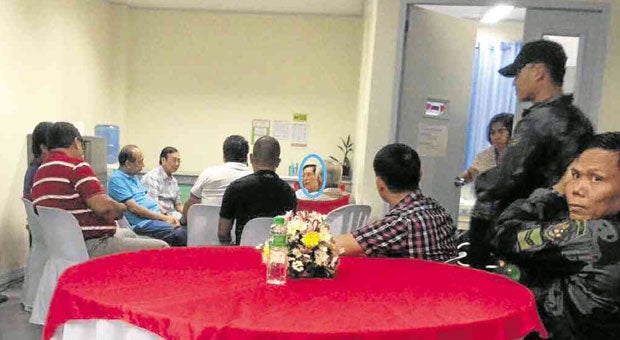 CAMERA-SHY, FOR ONCE Revilla (in white shirt, his back turned against camera), detained at the nearby PNP Custodial Center, denies attending the birthday fete of Sen. Juan Ponce Enrile (encircled). CONTRIBUTED PHOTO

Revilla said he was brought to PNP General Hospital, where Enrile has been detained since June last year, after Senior Insp. Celina Tapaoan, the detention facility’s officer of the day, approved his written request.

Along with fellow opposition Sen. Jinggoy Estrada, Revilla has been locked up at the police detention center since they were ordered arrested by the Sandiganbayan in June 2014 following their indictment for graft and plunder in connection with the P10-billion pork barrel scam.

Enrile was placed on hospital arrest at the PNP medical facility, just a few meters away from the PNP Custodial Center in Camp Crame, the PNP’s national headquarters.

Revilla said his sons, Cavite Vice Gov. Jolo Revilla and actor Bryan Revilla, were with him during his brief stay at the hospital which, according to him, lasted only about 30 minutes.

He said he returned immediately to his detention room “to rest after my blood pressure [reading] was taken and was given medication.”

The senator lambasted the prosecutors from the Office of the Ombudsman who “have again gone [to great] lengths to propagate lies and put me in a bad light.”

“If the sudden increase in my blood pressure was not taken care of and I suffered a heart attack, what would the prosecution do?” Revilla said. With a report from Inquirer Research

Revilla seen partying with Enrile in photos released by prosecutors