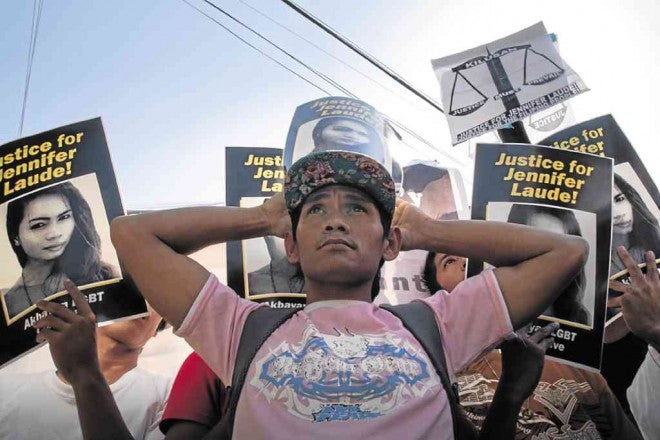 OLONGAPO CITY—US Marine Pfc Joseph Scott Pemberton refused to enter a plea on Monday, prompting a court here to submit a not guilty plea for him so that his trial for the murder of transgender Filipino woman Jeffrey “Jennifer” Laude could go ahead, prosecutors said.

Pemberton declined to make a plea because he wanted a higher court to first hear his appeal for the case to be dismissed, lawyers for Laude’s family told reporters outside the court.

The cramped courthouse, surrounded by market stalls selling dried fish, rice and eggs, is about a five-minute drive away from a cheap motel where the body of 26-year-old Laude was found in a bathroom on the night of Oct. 11 last year.

Pemberton, who was 19 at that time, was the last person seen with Laude before her death, according to police. He was charged with murder on Dec. 15.

The Department of Justice last month affirmed the decision of the Olongapo City Prosecutor’s Office to charge Pemberton with murder after the prosecution found probable cause to indict the American for Laude’s death.

Pemberton, held under joint custody of the Philippine and US governments, faces life imprisonment if found guilty.

On the night of Laude’s death, Pemberton and other US Marines had just finished joint exercises with Filipino troops at the former Subic Bay Naval Base.

Pemberton had ventured into the nearby red-light district for some rest and relaxation, and met Laude at a bar, prosecutors alleged.

Prosecutors will present at least 18 witnesses in court, including a friend of Laude who accompanied her and Pemberton to the motel as they checked in, one of the lawyers representing the victim’s family, Virginia Suarez, said.

A preliminary police report and findings that showed Laude died due to “asphyxia by drowning” will also be presented as evidence, she said.

“We have enough evidence and witnesses to convict

Pemberton of murder,” she said.

“He (Pemberton) was the only person with Jennifer the entire time she was in the hotel and the [motel] cashier can attest to that,” she added.

Earlier, Pemberton’s lawyers asked the Department of Justice to dismiss the case, then sought to downgrade the murder charge to homicide, saying there was no evidence to show that the killing was premeditated.

An appeal against the decision not to dismiss the case is still pending with the Court of Appeals, and Pemberton’s lawyers said on Monday that he would not enter a plea until those proceedings were over, according to Suarez.

Pemberton appeared at the Regional Trial Court Branch 74 here on Monday for the arraignment, but the proceedings were closed to the press.

The state prosecutor and lawyers for Laude’s family relayed to reporters outside the court his decision to not enter a plea.

Harry Roque, lead lawyer for Laude’s family, said the court scheduled a pretrial hearing for Friday, with Pemberton’s trial expected to start in the third week of March.

Roque said the prosecution expected Pemberton’s lawyers to offer a plea bargain during the pretrial but the Laude family would turn down any negotiations from the American soldier’s camp.

“What’s definite now is that we will not accept any negotiations. We will fight for justice,” Roque said.

Suarez said the preliminary conference and marking of evidence were also done on Monday.

She said Pemberton’s appeal would not stop the trial.

Pemberton’s lawyers, Suarez said, informed the court that the US Marine may not appear in court for the pretrial on Friday.

The Inquirer tried to confirm the information with lawyer Rowena Garcia-Flores, Pemberton’s lead lawyer, but she did not talk to reporters after the proceedings.

Laude’s sister, Marilou, said she and her sister, Michelle, saw Pemberton in court and they felt “harassed” in being surrounded by at least 16 Americans, some of whom were the Marine’s security escorts and members of the Naval Criminal Investigative Service. With a report from AFP