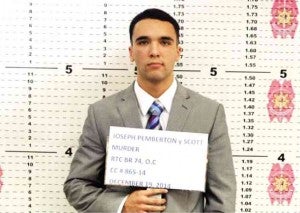 IN THIS photo taken Dec. 19, 2014, and released by the Philippine National Police Olongapo City, US Marine Pfc Joseph Scott Pemberton holds a nameplate while his mug shots are taken by police in Olongapo City. AP

OLONGAPO CITY—Security measures are set for the arraignment of a US serviceman accused of killing transgender Jeffrey “Jennifer” Laude here in October last year, a police official in Olongapo City said.

Insp. Vivian Reyes, city police spokesperson, said at least 150 policemen would be deployed Monday around the Hall of Justice here as US Marine Pfc Joseph Scott Pemberton is expected to appear in court for his arraignment.

Pemberton was charged with murder on Dec. 15 last year for the killing of Laude, whose body was found in a motel bathroom here on the night of Oct. 11.

Reyes said policemen are ready for the possible gathering of various groups in the city in time for the resumption of the court proceedings, which the court suspended to give way to a review of the murder charge filed against Pemberton.

Jabalde’s order for the resumption of proceedings came out on Feb. 2, a week after the Department of Justice (DOJ) on Jan. 27 affirmed the decision of the Olongapo City prosecutor’s office to charge Pemberton with murder after the prosecution panel found probable cause to indict the American for Laude’s death.

Laude’s sister, Marilou, and lawyer Virgie Suarez, one of the private counsels of the Laude family, said they met with the prosecutors on Wednesday to prepare for Monday’s proceedings.

She said Jabalde might also issue on Monday her resolutions on the pending motions of the Laude family to allow media coverage of the proceedings and to transfer Pemberton to the city jail.

The American soldier is held at a facility jointly managed by the Philippine and US governments inside Camp Aguinaldo in Quezon City.

Jabalde earlier denied another motion of the prosecutors asking her to inhibit from hearing the case because of her association with Flores.

Jabalde, however, said her being Flores’ classmate in law school “has nothing to do with [the conduct of court proceedings].”

Pemberton, escorted by American and Filipino security forces, first appeared in court on Dec. 19 when he surrendered to the Olongapo City RTC’s custody. But Pemberton was not arraigned that day as his lawyers requested for the suspension of proceedings to ask the DOJ to review the case. Allan Macatuno, Inquirer Central Luzon