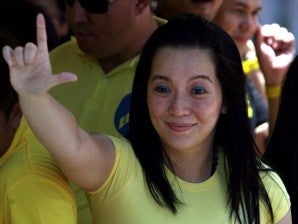 MANILA, Philippines – Presidential sister and actress Kris Aquino on Sunday said that she would not run in the 2016 elections, saying that she needs to support her brother President Benigno Aquino III when he steps down from his post.

Kris said that she is bracing for the worst scenario: where the President will have to face cases, which will be filed against him by his political opponents.

“Let’s be honest, maraming magiging kaso next year (na isasampa laban sa Presidente),” she said on Sunday on “The Buzz.”

(Let’s be honest: there are many cases to be filed (against the President).

The actress was apparently worried that the President may go through the same misfortunes of former president Gloria Macapagal Arroyo, who after she stepped down from Malacanang in 2010, was hounded by countless corruption lawsuits.

Kris said that she is prioritizing her family over political ambition.

It was superstar Nora Aunor who asked Kris if she is eyeing a government post in the 2016 elections.

Kris said that she is also focusing on growing her restaurant franchise, wanting to have eight branches by 2016.

Rumors circulated in 2014 saying that Kris is mulling a vice presidential bid to which she denied.