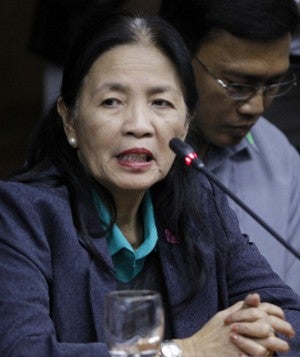 MANILA, Philippines—Whistle-blower Merlina Suñas has been accused by two Sandiganbayan justices of selective memory in her testimony about the pork barrel scam, causing alleged mastermind Janet Lim-Napoles to rejoice over her former employee’s blunder.

During Napoles’ bail hearing for plunder on Friday, Suñas testified that she handled all the paperwork for the transactions involving lawmakers’ Priority Development Assistance Funds (PDAF), the proceeds of which allegedly went to ghost projects for kickbacks.

However, the former all-around assistant of Napoles said she could not recall who came up with the list of supposed beneficiaries who did not receive any PDAF proceeds.

Presiding Justice Amparo Cabotaje-Tang hit back at Suñas and said she had written in her notes the whistle-blower’s earlier testimony that she was the one who prepared all PDAF documents.

“I cannot pinpoint who came up with the list,” Suñas said, to which Tang said: “You cannot deny that because that is in my notes!”

“You have selective memory … At some points, you have a partial amnesia,” Tang said.

Facing multiple plunder and graft charges over the scam, Napoles managed to rejoice, smile and punch her fists in the air upon Suñas’ testimonial booboo.

Associate Justice Alex Quiroz also noted Suñas’ “selective memory” when the whistle-blower testified that she was with Napoles during discussions with lawmakers but she could not recall how many times.

She said she vaguely remembered witnessing one transaction with a lawmaker in the House of Representatives, and later said it was with then Pampanga Rep. Zenaida Ducut, now Energy Regulatory Commission chairperson and an ally of former President Gloria Macapagal-Arroyo.

Ducut is said to be Napoles’ conduit to lawmakers for kickbacks.

“You say you only (directly transacted) once. How could you still forget the name of the lawmaker? It appears that you have a selective memory,” Quiroz said.