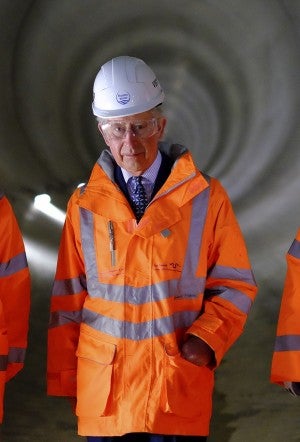 The heir to the British throne was marking the 150th anniversary of the city’s sewers, created by engineer Joseph Bazalgette to erase the “Great Stink” caused by sewage and effluent that was being dumped into the River Thames.

The 19th-century stench was so bad it overwhelmed lawmakers in the Houses of Parliament, who hired Bazalgette to find a solution. His sewers, a wonder of Victorian engineering, were designed for use by 2 million people but now struggle to serve more than 6 million people.

The prince visited the ornate Abbey Mills Pumping Station, a central part of Bazalgette’s network, wearing a high-visibility jacket to inspect a new tunnel designed to reduce the 39 million tonnes (43 million tons) of untreated sewage that is still released into the river each year.

Tony Brown, one of two young apprentices who showed Charles around the 7-meter (23-foot) wide concrete tunnel, declared the prince “down to earth and a real nice guy.”

The 7-kilometer (4.4-mile) Lee Tunnel, the deepest ever built under London, is due to go into use in December as part of efforts to deal with the flow of waste from London’s 8.6 million inhabitants. Their sewage not only taints the Thames but often creates “fatbergs,” — blobs of congealed fat, baby wipes and other waste that can weigh tons and clog sewers.

Charles’ great-great-grandfather, King Edward VII, opened Bazalgette’s sewer network when he was heir to the throne in 1865.

Prince Charles says he fears for Christians in Middle East

Read Next
Pope walks in Ash Wednesday procession between Rome churches
EDITORS' PICK
Gear up and get ready to play with Yamaha Mio Gear
If elected VP, Sara Duterte will push for mandatory military service for all Filipinos
Over 3 Million worth of prizes to be won at Smart Padala’s SENDali Manalo Promo!
Acer starts the year off strong with the Aspire Vero National Geographic Edition
Senate bill seeks to penalize employers requiring employees to work during rest hours
Marcos-era elections: Not what his son signed up for
MOST READ
Bongbong-Sara tandem names 7 candidates in initial senatorial slate
Jose Manalo’s son Benj pays tribute to late mother: ‘You’re a testimony of God’s love’
‘Sampal sa gobyerno:’ Drilon wants unvaxxed PAO chief barred from working
Vice mayor slams Vico Sotto for turning Pasig into a ‘puro palabas’ city
Don't miss out on the latest news and information.