Tagle: Make difference for Lent, give up indifference | Inquirer News

Tagle: Make difference for Lent, give up indifference 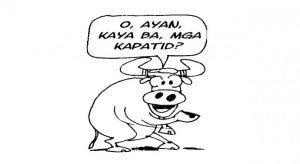 MANILA, Philippines–Thinking of what to give up for Lent? Try indifference.

People have grown more self-centered that they become unresponsive or insensitive to the needs of others, Tagle said in his homily for Ash Wednesday Mass at Arzobispado de Manila.

“There is a prevailing culture of indifference in our world today …. It has become the root of so many problems and injustices in our society. People are becoming more detached, unmoved and unconcerned with other people’s sufferings and the injustices they endure because they are too focused on their own interests,” he said.

Tagle said indifference often seemed to possess our hearts. “Time will come, those hearts will grow apathetic toward others and toward God. Pope Francis said that’s scary because it becomes a culture. When we say culture, it’s spontaneous, it becomes second nature. Being selfish, being numb toward God and others becomes natural.”

The prelate cited an instance abroad when he was still a student. He and his two other friends rushed to help someone whom they saw fainted on the street, but they were prevented from doing so by other bystanders.

“We were told not to assist, not to care for that person because they said we might be sued if that person dies. Imagine, even the laws are teaching us to be indifferent,” he lamented.

The cardinal added that if Filipino Catholics wanted the culture of indifference to stop, they should start a culture of caring for others based on their love of God.

“If God were indifferent, if His heart had not been filled with love and offered Himself for our salvation, what do you think would have happened to us? I hope our hearts would become more like Jesus’ and that would only happen if we returned to God,” Tagle said as he urged the faithful to pray, fast and do acts of charity.

He said people should learn to pray not only for oneself but also for the welfare of others.

“It’s all right to pray for ourselves, our own needs. But how much time do we spend praying for others? Maybe, even in prayer we become indifferent to others,” he said.

He reiterated his appeal to the faithful to practice acts of charity and fasting to help feed hundreds of thousands of hungry and malnourished Filipino children.

Tagle encouraged Catholics to participate in the archdiocese’s Fast2Feed program, a Lenten campaign that urges people to fast and donate the money to be spent for food to the Hapag-Asa program.

Hapag-Asa is a Church-led initiative and part of the Pondo ng Pinoy movement to combat hunger and malnutrition among children in the country’s poor urban and rural communities.

“If we fast and let the poor, hungry and undernourished children benefit from it, we relive what Jesus said, ‘I was hungry and you gave me something to eat,’” Tagle said.

“Apart from Fast2Feed, there’s Pondo ng Pinoy. There are a lot of poor people on the streets …. [O]ur effort to help them has to continue because there are still millions of them in need of our love and assistance,” the cardinal said.

Millions of Catholics all over the world yesterday observed Ash Wednesday, the start of Lent.