Knife fish sausage, anyone? The predator fish considered undesirable in Laguna de Bay will be processed into sausages and dumplings soon by a P600,000 facility in the lakeshore town of Pila in Laguna province in what is regarded a first-of-a-kind initiative.

The food program aims to “minimize, since it looks like we can’t eradicate anymore, [the effects of the] knife fish (in Laguna de Bay),” Mayor Wilfredo Quiat of the third-class municipality (annual income: P35 million-P45 million) of some 50,000, said in a phone interview.

Knife fish (Chitala ornata) is an ornamental species that, according to the Laguna Lake Development Authority, found its way into the lake after escaping from an aquarium at the height of Tropical Storm “Ondoy” in 2009.

National and local government agencies have since devised measures to contain the growing population of the knife fish, regarding the species as a continuing threat to the lake’s aquaculture by feeding on the fingerlings of native fish, such as bangus (milkfish), tilapia, ayungin (silver perch) and biya (goby fish).

According to Quiat, a single knife fish weighing one kilo is equivalent to seven kilos of other fish species it consumes.

“The problem is it does not have as much market value. A kilo of tilapia, for instance, sells for P60-P70, but a knife fish could be sold for just P30,” he added. 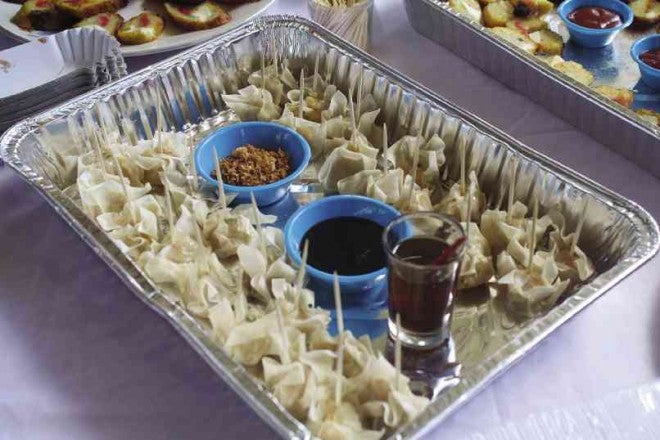 KNIFE fish meat is the main ingredient in these dumplings processed in a facility in Pila, Laguna province. DTI-CALABARZON/CONTRIBUTOR

Although fishermen considered the knife fish “undesirable,” it has more economic value than the janitor fish (Hypostomus plecostomus), another invasive fish species that got into Laguna de Bay in the ’90s, said Charlie Dajao, spokesperson of the Department of Trade and Industry (DTI) regional office.

As part of a multiagency task force created to address the infestation, the DTI turned over to Pila a P661,500 food processing plant on Feb. 11. The agricultural town has five of its 17 villages dependent on Laguna de Bay.

Last year, the municipality was also a beneficiary of a P1.7-million national government cash-for-work program (fishermen were paid to catch the knife fish). But Quiat said that fund has been used up.

With food cutters, stoves, sausage fillers, a chiller and a chest freezer thrice the size of an average one, the facility in Barangay Pinagbayanan can make the fish meat into nuggets, dumplings, sausages, burger patties or even fish balls, a popular Filipino street food.

A women’s cooperative, Alyansa ng Kababaihan ng Pila, which is composed mostly of the wives and daughters of fishermen, manages the factory.

The selling price would be determined once the food processing facility starts operating in March, Quiat said. Maricar Cinco