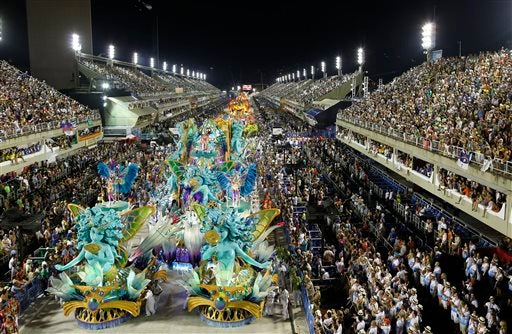 Performers from the Uniao da Ilha samba school parade during carnival celebrations at the Sambadrome in Rio de Janeiro, Brazil, Tuesday, Feb. 17, 2015. A German tourist died from stab wounds after resisting assailants who tried to rob him as the Rio carnival wound down, police told AFP Wednesday. AP PHOTO/LEO CORREA

Fred Nietenf, 51, died in the early hours of Tuesday in central Rio, as carnival entered its final day.

“An investigation is under way to determine who was behind the homicide of Fred Nietenf,” police said.

Police added they had interviewed the victim’s wife, also reported hurt in the incident and whom web news portal G1 named as Sybelle Jurth, 52.

Sunday saw a Dutch tourist, 60-year-old Ronald François Wollbeek shot dead on his sailboat at Sao Luis do Maranhao in the northeast of the country after an altercation with three men at his mooring point.

The five-day carnival saw sporadic deadly violence, including when a man was fatally stabbed in the southeastern city of Sao Paulo and another killed in a shooting which injured nine others in the colonial city of Paraty west of Rio.

The festivities turned deadly again early Tuesday, when three men were electrocuted after a carnival float ran into a power line in the southeastern Brazilian city of Nova Iguacu, local media reported.