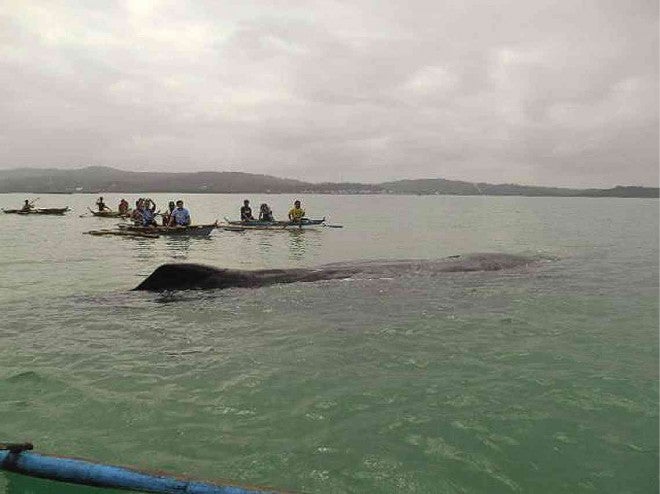 LUCENA CITY—A sperm whale that had been stranded near a coastal village in the town of Calauag, Quezon province, died yesterday, an environment official of the province said.

Manny Calayag, community coordinator of the Quezon-Environment and Natural Resources Office, said the sperm whale, one of the world’s largest animals, died around 7:30 a.m. in the shallow portion of the waters off Lamon Bay near the coast of Bangkorohan village.

The whale was found by fishermen a kilometer away from the shore on Tuesday, said Senior Insp. Noel Divino, Calauag police chief.

He said the whale, measuring 40 feet long and 10 feet tall, was found with a wound on the right part of the belly.

“The whale is almost as long as a bus,” Divino said in a phone interview.

Local policemen secured the whale until authorities from the municipal veterinary office arrived.

Calayag said experts from the provincial veterinary office and the Bureau of Fisheries and Aquatic Resources (BFAR) traveled to Calauag at dawn yesterday to help in the rescue operation.

The whale, unfortunately, was already dead when the group reached Calauag yesterday morning.

Calayag said he recommended a necropsy of the whale to determine the cause of death. The whale’s gender has yet to be determined.

According to the website of the Oceanic Research Group, sperm whales are the largest toothed whales in the world and perhaps the most abundant of great whales.