SAF widow: Aquino being shielded from accountability in Mamasapano incident 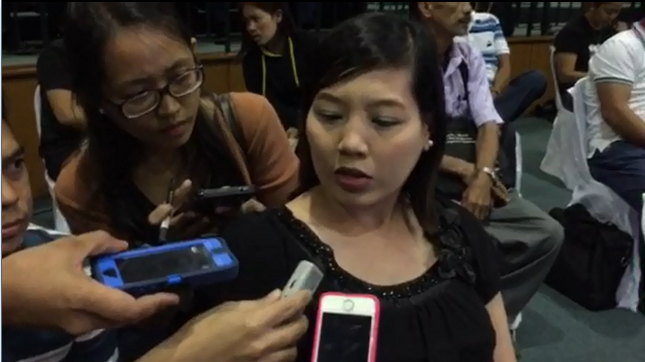 MANILA, Philippines–The widow of an elite cop killed in Mamasapano hit President Benigno Aquino III on Wednesday for being mum on the botched operation.

Rachel Sumbilla, the wife of the late PO3 John Lloyd Sumbilla, believes that Aquino is being shielded from being held accountable on the Mamasapano incident which resulted in the death of 44 Special Action Force troopers.

(Personally, yes (Aquino is being shielded from taking responsibility for the Mamasapano operation) because he is not talking now. The last thing he said was that he is going to carry the tragedy until death. But I think it was not enough.)

She also decried the slow response of the government in seeking justice for the slain elite cops.

(We’re seeking swifter action (to the case) as the SAF men have been buried already. But we are still being burdened.)

The widow said that justice can only be attained if every official involved in the bloody operation will be punished, including Aquino.

((We will attain justice only) if everyone involved in the operation will be punished, including the President because he is the commander-in-chief.)

At the end, Sumbilla made a tearful plea to the chief executive.

“Please coordinate with us, Mr. President,” she said.

During Wednesday’s special tribute, the Makati City government awarded P100,000 financial assistance to the relatives of the slain troopers.

‘Behind every brave SAF trooper is a strong wife’

Widow on cash aid: What do I do with it?

SAF widow tells Roxas: I want to be a cop