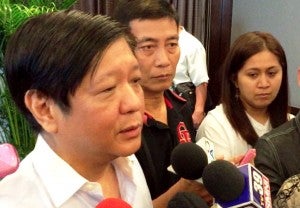 “The agenda of the said meeting was to ask ‘what really happened’ and ‘how do we move forward’ (after the Mamasapano clash),” Marcos said.

The BBL is currently pending in the Senate local government committee chaired by Marcos.

Meanwhile, the senator decried the security breach following the incident.

“Suddenly, you don’t feel secured in your office. Hindi naman puwede ‘yun. (It should not be the case.) Because how can you conduct your business in government in that kind of atmosphere?” he lamented.

The Senate hearing on the Mamasapano incident started on Feb. 9, 13 days after the reported meeting between Marcos and Deles.