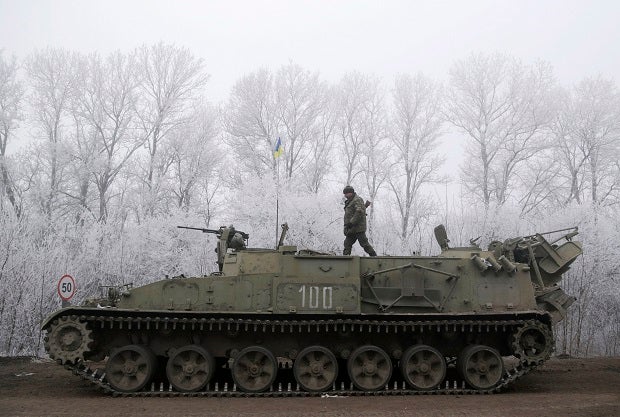 Ukrainian government soldier walks atop of his armored vehicle on the road between the towns of Dabeltseve and Artemivsk, Ukraine, Sunday, Feb. 15, 2015. International attention will be focused in the coming days on the strategic railway hub of Debaltseve, where Ukrainian government forces have for weeks been fending off severe onslaughts from pro-Russian separatists. A ceasefire was declared in eastern Ukraine, kindling slender hopes of a reprieve from a conflict that has claimed more than 5,300 lives. AP

LUHANSKE, Ukraine — A ceasefire that went into effect Sunday in eastern Ukraine appeared largely to be holding, although continued fighting over a bitterly contested railway hub is threatening to upend the delicate settlement. 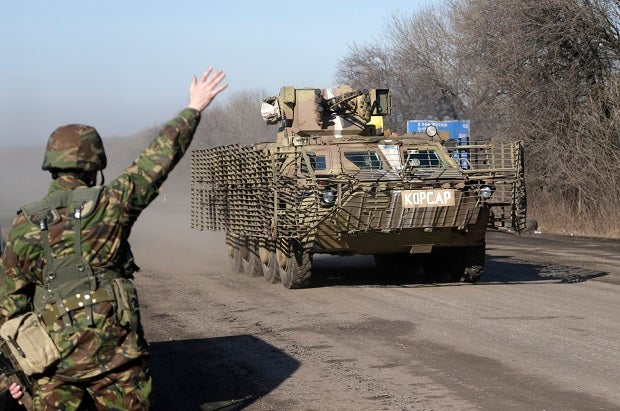 A Ukrainian government troop waves to a armored vehicle driving on the road towards Debaltseve near the town of Artemivsk, Ukraine, Friday, Feb. 13, 2015. The fighting between Russia-backed separatists and Ukrainian government forces has continued despite the agreement reached by leaders of Russia, Ukraine, Germany and France in the Belarusian capital of Minsk on Thursday. Much of the fighting had taken place near Debaltseve, a key transport hub that has been hotly contested in recent days. AP

The leaders of Russia, Ukraine, France and Germany, who last week brokered a deal to try to end the conflict that has raged since April, agreed in a conference call Sunday that hostilities should also cease around the government-held town of Debaltseve, Ukrainian President Petro Poroshenko’s office said. Undeterred, armed separatists appeared intent to pursue their claim to the town.

Heavy fog shrouding sodden fields muffled the sound of artillery, but regular shelling could still be heard from Luhanske, a town about 15 kilometers (9 miles) to northwest of Debaltseve and over 80 kilometers west of the city Luhansk. Associated Press journalists were blocked from moving closer by Ukrainian troops, who said it was not safe to travel ahead.

The cease-fire has kindled slender hopes of a reprieve from a conflict that has claimed more than 5,300 lives. Withdrawal of heavy armor from the front line by both sides is scheduled to begin Monday.

Attention will be focused in the coming days on Debaltseve, where Ukrainian forces have been fending off severe onslaughts from the rebels for weeks. The town is a railway link between the main separatist-held cities of Donetsk and Luhansk.

The diminution in hostilities was agreed after a marathon session of diplomacy that brought together Poroshenko, Russian President Vladimir Putin, German Chancellor Angela Merkel and French leader Francois Hollande for talks in the capital of Belarus, Minsk.

In a conference call Sunday, the leaders agreed the cease-fire should extend to Debaltseve, according to a statement from Poroshenko’s office.

That flies in the face of the position taken by rebels, who argue they should be granted immediate control over the town as it is entirely surrounded by their forces. Separatist officials have said any force adopted against Ukrainian troops in Debaltseve would accordingly not violate the Minsk agreement. 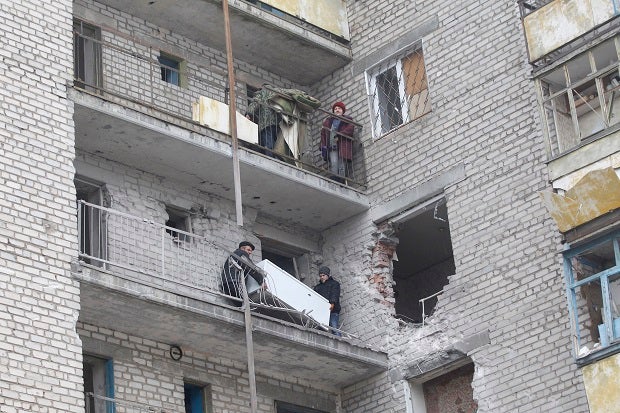 Residents carry a refrigerator through a balcony at an apartment building that was damaged in recent shelling between Russian-backed separatists and Ukrainian government forces in the town of Svitlodarsk, Ukraine, Sunday, Feb. 15, 2015. A cease-fire was declared in eastern Ukraine, kindling slender hopes of a reprieve from a conflict that has claimed more than 5,300 lives. AP

As he issued the cease-fire order at one minute after midnight Kiev time Sunday (2201 GMT, 5:01 p.m. EST), Poroshenko had said the road to the town remained open and that Ukrainian troops there had been resupplied with ammunition.

Merkel’s office said that the call’s participants welcomed the general acceptance of the truce, but were concerned about continuing combat operations, especially in the area around Debaltseve.

“They showed determination to work toward a full implementation of the true. As a next step, Tuesday’s agreed on withdrawal of heavy arms had to be started,” the statement said.

The offices of both Merkel and Hollande said the leaders involved in Sunday’s call also expressed joint support for adopting a United Nations Security Council resolution codifying the measures adopted in Minsk.

A statement from the Kremlin confirmed they discussed the difficult situation in Debaltseve and also the role of the OSCE in monitoring the cease-fire.

Under the deal hammered out at last week’s negotiations, the progress of the cease-fire is to be monitored by observers from the Organization for Security and Cooperation in Europe.

The head of the OSCE monitoring mission, Ertugrul Apakan, said that the organization has dispatched 20 patrols to monitor the state of the cease-fire.

“We made an attempt to send our monitors to Debaltseve, however our patrol has been refused access by the so-called DPR,” Apakan said, using the acronym for the Donetsk People’s Republic separatist movement. 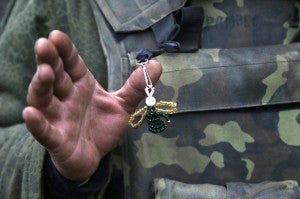 Ukrainian government soldier shows his good luck charm while resting on the road between the towns of Dabeltseve and Artemivsk, Ukraine, Sunday, Feb. 15, 2015. International attention will be focused in the coming days on the strategic railway hub of Debaltseve, where Ukrainian government forces have for weeks been fending off severe onslaughts from pro-Russian separatists. AP

Apakan said the cease-fire was being respected on the whole barring some isolated instances.

A spokesman for the Ukrainian army general staff, Vladislav Seleznyov, said during a morning briefing that shelling was noted 10 times, with all but one incident occurring in the Debaltseve area. Another military spokesman, Andriy Lysenko, said Sunday that nine Ukrainian troops had died over the previous day’s unrest.

The rebels have in turn accused the Ukrainians of deploying artillery in the Debaltseve area shortly after midnight.

At an army checkpoint along the road to Debaltseve, a commander said Sunday the shelling appeared to have come from an area beyond Debaltseve controlled by “gangs other than the Russians and the separatists, such as Cossacks.” The commander, who would identify himself only as Sanich, said these forces “submitted to no authority.”

Donetsk, the separatist stronghold, was quiet Sunday morning with no shelling from government forces, the Donetsk News Agency, a separatist mouthpiece, reported, citing the city administration.

In the Luhansk region, two civilians were killed shortly after midnight in the government-controlled town of Popasne as a result of shelling, regional authorities said. The town lies directly on the front line, only a few kilometers (a mile or two) from the nearest separatist positions.

The shells hit a shop, a medical clinic and a private residence, Luhansk Governor Hennadiy Moskal said in a statement. “The owners of the house — an 87-year-old man and a 67-year-old woman — died under the ruins,” Moskal said.

The hours before the cease-fire were marked by ferocious battles around Debaltseve, as Ukrainian armed forces undertook desperate attempts to gain control over a highway linking the town to their rearguard.

The U.S. State Department said satellite images from eastern Ukraine offer “credible pieces of evidence” that the Russian military has deployed larger amounts of artillery and multiple rocket launchers around Debaltseve to shell Ukrainian forces. The images could not immediately be verified.

Russia has repeatedly denied Western claims that it has sent troops and equipment to aid the rebels.

Cessation of hostilities is only the first in a series of planned steps agreed to in Minsk.

Withdrawals of heavy weaponry from the front line, creating a zone roughly 50-140 kilometers (30-85 miles) wide, depending on the caliber of the weapons, are to begin Monday and be completed in two weeks. No provisions are envisioned for the withdrawal of troops.

The peace plan also requires the Ukrainian government to resume paying pensions and state benefits to citizens in rebel-held territory. Ukraine’s financial blockade against the rebels has led to a catastrophic collapse in living standards in eastern Ukraine, depriving the poorest of any immediate means of support.