Battle of Manila: That unforgettable day in 1945 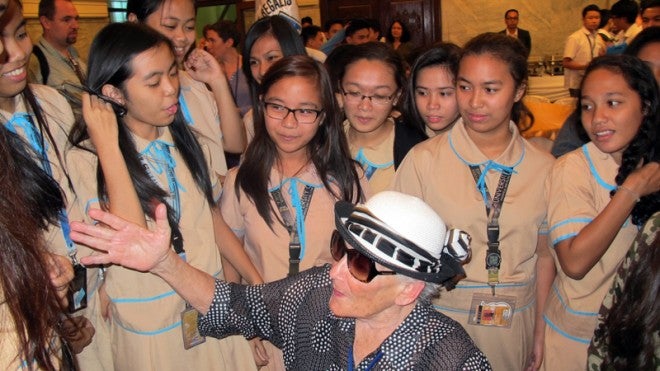 MANILA, Philippines–While the Western world focused its attention last week on the end of World War II and the liberation of Jewish prisoners in Europe, it is now time for Asia, specifically the Philippines, to remember its own suffering.

Seventy years ago, fierce fighting to liberate Manila killed 100,000 people, ending years of Japanese occupation and leaving the city, once nicknamed the “Pearl of the Orient,” the second most destroyed allied city in the world.

This month, efforts are being made not only to remember but to teach the importance of remembering.

On Feb. 3, former prisoners of the Japanese internment camp at University of Santo Tomas (UST) came together from the United States and the United Kingdom for the celebration of the 70th anniversary of the Liberation of Manila.

They came to remember that unforgettable day in 1945 when they were given their freedom by American troops racing to save their lives.

This was Sascha Weinzhimer Jansen’s sixth and last visit from California to the site of the prison camp she shared with 4,000 others for three years.

Jansen, now 82, was 12 and had polio when her family, along with citizens of other allied nations, was forced into the camps. But she remembers liberation as if it were yesterday.

“It was an amazing thing—they came crashing through the front gate. We didn’t know who it was, whether they were Russian or from the USA—they changed the American insignias on the tanks. But then someone yelled out the window, ‘I smell American gasoline!’”

She recalls that earlier that day, while standing in line with a tin can to get her daily “lugaw” (rice porridge), the pilot of a fighter plane flying very low had dropped his goggles with a note attached to it that said, “Christmas is coming soon.”

A newly launched book, “Surviving a Japanese Internment Camp: Life and Liberation at Santo Tomas, Manila, in World War II,” by Rupert Wilkinson, was presented at the UST commemorations.

Highlighted from the book for the commemoration were the internees’ liberation, the gripping hostage situation in which Wilkinson was one of 200 hostages, and even the extraordinary “visit,” hatched by Wilkinson’s father, of an American Navy Seal who simply walked into the camp to gather intelligence weeks before its liberation.

Highlighted from the book were the more difficult and controversial issues regarding Japanese perspectives.

Although Wilkinson himself was an internee, the book provides a balanced study of many of the challenges confronting the internees and even looks at Japanese perspectives and the wider context in which they fought.

As Wilkinson writes, there was not one World War II. People had different experiences and opinions that the book captures.

Jansen recalls the effect the lack of food had on the internees: “Malnutrition does a strange thing to you. You not only lose weight but your mental equity, and you have to keep apologizing all the time. We used to apologize to the army when they would ask us a question and you have to say, ‘Um, I know that, but just give me a minute.’”

Ayala Foundation continues the commemorations all February with a series of events called “Manila at War,” where the Roderick Hall Collection on World War II in Manila will be showcased and speakers will talk about Manila memories.

Nelly Fung, daughter of the late Ambassador Marcial P. Lichauco, who wrote “Dear Mother Putnam: Life & Death in Manila during the Japanese Occupation 1941-1945,” will share from this diary about the daily lives of millions of Filipinos as they struggled to survive.

Fung hopes that current and future generations will know of the ordeals the country went through and the sacrifices made by our ancestors.

Fung says, “I hope readers will learn the futility of war, the difficult choices people had to make, the importance of courage and hope in the face of extreme adversity. As many of the generation who survived have said, ‘We can forgive but we must never forget.’”

Memories of the wartime years were brought to life though a documentary film called “Manila 1945—The Rest of the Story.”

After learning about the struggle of life and death during the occupation, UST history student Kate Manansala, 16, says that learning history is key to developing pride in your country.

She explains, “In our generation, there is no sense of nationalism. People think it’s better in the USA or England because the Philippines is useless. If they know about history, they’ll give importance to what the people fought for to gain Philippine independence. They would know what the people went through just to liberate us because if they don’t value that they will belittle the Philippines.”

Manansala concurs, “Like what the film said, if you forget history then you forget who you are. You know who you are if you know where you came from and understand what happened.”

Vogie Pacalam, 17, says the film taught her a side of history that history books can’t always do: “We can see that no matter what happened, when it ended we are still resilient—whatever happens we’ll survive.”

Students were also given the opportunity to learn about the war directly from those who survived it. Former prisoners of war shared their memories and feelings, and UST students listened quietly and asked questions eagerly.

When one student asked, “How did you survive all those years? Did you not want to give up hope?” Jansen responded: “No. We never said ‘if’ they came in …. We said ‘when’ they came in and that is the most positive thing you can live by.”

Jansen says that in preparing and hoping for that day when freedom would come, many women at the camp “kept something, one item aside, to wear ‘when their boys came.’”

For Jansen, it was a pair of socks, for her mother, it was an almost empty lipstick kept hidden under her mattress.

When liberation came, her father started to carry his then very weak, 78-pound (35-kilo) wife to the gates, but she insisted, “Wait, we have to go back for my lipstick.” And they did.

Fifteen-year-old Andre Concepcion says that before attending the commemorative events, he knew very little about the internment camp at her university.

Concepcion says listening to the former internees made him feel lucky and inspired.

Amidala Senica, 15, says, “Even though we were not in that situation, we can still know what happened and get lessons from what happened. Having them say it directly to you makes you feel the history more.”

Proud to be Filipino

Alexandra Kraft, 20, who came to the Philippines with her grandmother and grand-aunt, both former internees, echoed the importance of knowing your country’s history.

She adds, “In knowing history you can take the future into your own hands, and you don’t have to be swayed by the hatred that anybody tries to make you have.”

Concepcion says he learned things that have broadened his perspective. “The Philippines fought and it helped to create peace. I feel very proud that I am a Filipino.”

He says, “I want the younger generations to know what our country went through three and a half years of terrible Japanese occupation. We had some terrific fights. We were badly defeated. We were not prepared but we stood up, and we took it, we suffered greatly, had great casualties but we survived and moved on. We could be proud as Filipinos of the way we stood up.”

Rocha lost his mother during the fighting but like many survivors, kept the trauma to himself and suffered privately for many decades. It was only on the 50th commemoration of Liberation that Rocha and others started to share their experiences with each other.

He recalls, “We started to talk and our mental blocks faded away and things we kept back emerged and that really helped us.”

It also became a call to action for the group to do something to ensure that those who lost their lives during Liberation would never be forgotten.

Standing in front of the Memorare monument in Intramuros, which the group built in 1995 and is the venue for an annual commemorative event, he says the sculpture shows the spectrum of what happened 70 years ago.

Rocha says, “The Lady is the motherland in pain, holding a dead infant, the girl is a rape victim holding her child, a man bewildered with his family lost, and an elderly and a youth who were killed.”

Remembering walking through a hospital and seeing bodies “everywhere, from top to bottom,” he says, “War is hell and we lived through it. We pray that you, the future generations, never experience what we did or saw what we saw.”

Memorare’s purpose, he says, is not to recriminate or ask for compensation but to honor the lives lost and to request Japan “to recognize what they did and to offer a long-overdue apology.”

Rocha explains, “Japan is now our friend, but history can’t be rewritten. These are facts. Please come to terms with your past—Germany apologized so it should not be a problem for Japan.”

This year’s 70th commemoration was held on Valentine’s Day—a day for love throughout the world but for survivors of the war, a day for them to remember the loved ones they had lost.

An engraved plaque was unveiled that lists the many sites where the Japanese military’s massacres of civilians took place.

Ambassador Miguel Perez-Rubio, 89, was a 19-year-old prisoner of the Japanese Kempeitai (the equivalent of the German Gestapo) in Baguio when his mother, father, sister, brother and many other immediate family members were slaughtered by the Japanese.

He says, “The Japanese set fire to our home and those who did not burn to death ran outside, but were then killed by bayonets then gunfire.”

Despite his terrible loss, Perez-Rubio says that if the Japanese who killed his family were to apologize, he would forgive them.

Rocha says that the war, which killed over 1,700,000 of the country’s prewar population of 17 million, changed the Philippines dramatically.

“The majority of those we lost were young, future leaders,” he says. “Our whole lifestyle, our political and social outlook, it completely changed, and Manila, of course, had to be rebuilt. The life we had before just vanished in the flick of a finger.”

Former President Fidel V. Ramos, who spoke at this year’s Memorare commemoration, said the Battle of Manila was indisputably the greatest tragedy and manmade disaster in the history of the Philippines in terms of lives lost and total destruction and irreparable damage to our cultural heritage.

“It was an excessively high price to pay for freedom, but there is a valuable lesson for future generations—they must never forget that war is not an option,” Ramos said.

Documentary on Battle for Manila is remembrance, reminder