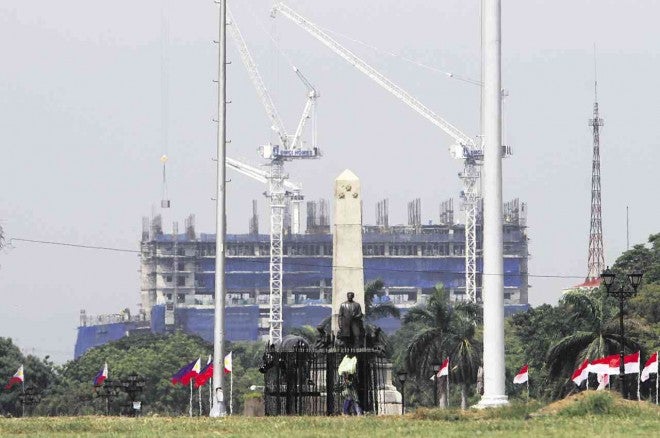 File photo of Torre de Manila which, as of Aug. 20, was 22.83 percent completed, according to an update on the project developer’s website. EDWIN BACASMAS

MANILA, Philippines – A Makati court has denied a bid by the builders of the Torre de Manila condominium to junk an order by the National Commission for Culture and the Arts to stop work on the building, which critics say is marring the sight line of the Rizal Monument and park.

Counsels for DMCI has refused to comment on the court’s decision for the meantime while the company is still studying its next move.

In her five-page order, Moya upheld the quasi-judicial nature of the NCCA, which means it can hear cases, issue stay orders and compel action on the issues brought to its attention, among others.

“A quasi-judicial agency or body has been defined as an organ of government other than a court and other than a legislature, which affects the rights of private parties through either adjudication or rule-making,” she explained.

Moya noted that Republic Act 7356 (Law Creating the National Commission for Culture and the Arts) and RA 10066 (National Cultural Heritage Act of 2009) mandates the NCCA to uphold, preserve and conserve national cultural heritage and properties, while also empowering the agency to hear cases within its remit and penalize violators.

According to Moya, trial courts have no jurisdiction over the NCCA and the Rules of Court indicate that cases against decisions of such government bodies should be handled by higher courts.

“This court is bereft of jurisdiction to hear the application for TRO and the petition for prohibition. Such petition against quasi-judicial bodies is properly cognizable by the Court of Appeals,” the decision read.

DMCI filed the case at the Makati RTC on Feb. 2, less than a month after the NCCA issued the CDO on Jan. 5. NCCA officers served the CDO at the Torre de Manila construction site along Taft Avenue and at DMCI’s head offices in Makati on Jan. 13.

In its order, the NCCA ordered DMCI to stop construction of Torre de Manila on the grounds that it mars the sight lines and background to the Rizal Monument, which has been declared a National Cultural Treasure.

The CDO will be in effect “until such time as the commission can make the declaration of whether or not there is actual destruction and if such destruction warrants a permanent cease and desist order.”

However, in its petition to the court, DMCI protested the issuance of the CDO, saying that the NCCA had no jurisdiction to compel DMCI to stop construction, as it was not infringing on the area of the Rizal Monument and park, but rather building on its private land.

NCCA officials said the court order meant that they could continue to enforce the CDO, and said they would hear arguments for the continued imposition of the order on Feb. 26.

The agency has accused DMCI of violating the CDO, as they acquired footage showing a crane in the construction site moving construction equipment. The NCCA has warned that it could issue arrest warrants to DMCI’s officials for continuing to violate the CDO.