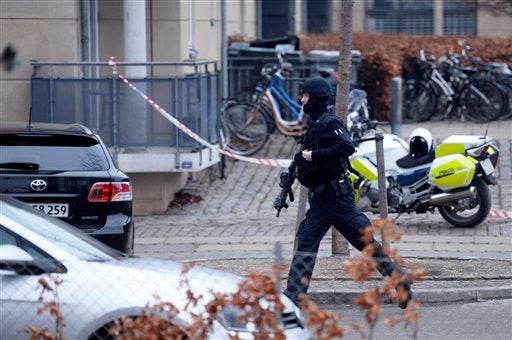 An armed security officer runs down a street near a venue after shots were fired where an event titled “Art, blasphemy and the freedom of expression” was being held in Copenhagen, Saturday, Feb. 14, 2015. AP PHOTO/POLFOTO, KENNETH MEYER

COPENHAGEN, Denmark—A gunman fired on a cafe in Copenhagen as it hosted a free speech event Saturday, killing one man, Danish police said. The event was organized by Swedish artist Lars Vilks, who has faced numerous threats for caricaturing the Prophet Muhammad.

Three police officers were wounded attempting to protect those inside the venue, police said. French ambassador Francois Zimeray, who was at the debate, said the attack had “the same intention as Charlie Hebdo,” referring to the killings at the satirical newspaper in Paris last month.

Danish police said the gunman shot through the windows of the Krudttoenden cafe, which the TV2 news channel said were riddled with some 30 bullet holes. Helle Merete Brix, one of the event’s organizers, told The Associated Press that Vilks was at the meeting but was not hit.

“I saw a masked man running past,” Brix said. “I clearly consider this as an attack on Lars Vilks.”

Police were looking for the perpetrators, who they said drove away in a dark Volkswagen Polo after the shooting, which took place shortly before 4 p.m. (1500 GMT, 10 a.m. EST).

In a statement, Danish police said the victim was a 40-year-old man inside the cafe attending the event. He has not yet been identified.

“I heard someone firing with an automatic weapons and someone shouting. Police returned the fire and I hid behind the bar. I felt surreal, like in a movie,” Niels Ivar Larsen, one of the speakers at the event, told the TV2 channel.

Brix said she was ushered away with Vilks by one of the Danish police guards that he gets whenever he is in Denmark.

The cafe in northern Copenhagen, known for its jazz concerts, was hosting an event titled “Art, blasphemy and the freedom of expression” when the shots were fired.

François Zimeray, the French ambassador to Denmark who was at the conference, tweeted that he was “still alive.”

Vilks, a 68-year-old Swedish artist, has faced several attempted attacks and death threats after he depicted the Prophet Muhammad as a dog in 2007.

A Pennsylvania woman last year got a 10-year prison term for a plot to kill Vilks. In 2010, two brothers tried to burn down his house in southern Sweden and were imprisoned for attempted arson.

After Islamic militants attacked the Charlie Hebdo satirical magazine in Paris last month, killing 12 people, Vilks told the AP that even fewer organizations were inviting him to give lectures over increased security concerns.

Vilks also said he thought Sweden’s SAPO security service, which deploys bodyguards to protect him, would step up the security around him.

“This will create fear among people on a whole different level than we’re used to,” he said. “Charlie Hebdo was a small oasis. Not many dared do what they did.”–Jan M. Olsen with Karl Ritter in Stockholm