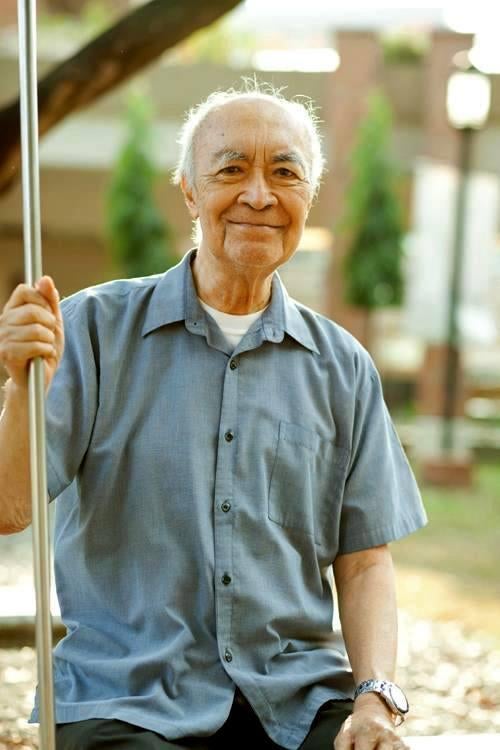 MANILA, Philippines–He was fondly called Father Bu. Students also called him guru, Jedi Master and guide to the unknown universe. He was my teacher.

Known as the “father of Philippine psychology,” Fr. Jaime Bulatao, SJ, died on Feb. 10. He was 92. After a funeral Mass at Ateneo de Manila University’s Church of the Gesu Friday, he was laid to rest at the Jesuits’ Sacred Heart Novitiate cemetery in Novaliches.

In a piece I wrote about him for the book “To Give and Not Count the Cost: Ateneans Inspiring Ateneans, 1859-2009,” which was published for Ateneo’s sesquicentennial, I recounted how Father Bu’s 3-by-2.4-meter (10-by-8-foot) room could hold “a universe of objects…,” stuff that looked like they came straight from “The Twilight Zone.”

Here’s my piece from that book, titled “In Fr. Bu’s room, fly on a witch’s broom,” edited to reflect his recent passing.

“IT’S MY mess and I love it,” declared the piggy on the poster that sat on a heap of odds and ends.

Welcome to Fr. Jaime Bulatao’s room and its 1001 curiosities. This room could have been one of the wonders of the Ateneo campus, if not of the entire Loyola Heights. It was amazing how a 10-by-8-foot room could hold a universe of objects and literature on the psychic, the unusual, the spiritual, the mystical, the extraterrestrial, the astral, the paranormal—and not explode, whirl or hurtle itself into the unreachable beyonds where finally all the energies therein could be dissipated or transformed.

It was a wonder, too, how its occupant, Father Bu, and his friends, clients, counselees, students and colleagues could feel at home in such surroundings. The place could be described as messy, topsy-turvy, typhoon-visited, weird, out of this world, a curio shop, a playground for spirits, intelligent.

Father Bu was one of the country’s leading clinical psychologists known for breaking ground in the field of the psychic. He did so at a time when dabbling in folk beliefs and sorting out strange happenings and encounters in the simple folk’s backyard were considered unintellectual, even un-Christian. He was among the first to venture into the once esoteric field of cognitive psychology and transpersonal psychology.

Father Bu was the person to consult regarding altered states of consciousness (ASC), which had been the subject of his continuing research. And as he and we, his students, found out, the possibilities when one is in such state are surprising, not to say bewildering. Many of the things in Father Bu’s room were in fact aids to heighten ASC.

Father Bu was my teacher in graduate school. I was in his master’s classes in abnormal psychology, psychological testing and projective techniques. At that time, the academe was abuzz with his groundbreaking forays into the Filipino psyche and spirituality. His groundbreaking research and treatise on the Filipino’s “split-level Christianity” has become a classic reference for behavioral and social scientists, while “Phenomena and Their Interpretation” is a must-read for those interested in the paranormal. His written works are too many to mention.

The thousand or so books in that little room were piled on shelves, atop and under desks, on chairs and under them, inside cartons and drawers, on the floor. The smorgasbord of titles gives one an idea of this Jesuit priest’s wide interests—from “Undestanding Mysticism,” “Pornography and Silence” and “Kundalini Meditation,” to a book on St. Therese.

The last time I was in his room, I could tell it had not changed much since I was a student, but maybe 3,000 more things and “occupants” had since been added to the congestion. No, he did not mean to make his room look this way, he laughed. “It gets tidied up every so often but it just becomes that way again.”

Children loved to romp about in the exciting accumulation. The room might be cramped but it afforded a different kind of space to those whose minds and spirits needed to roam and soar. The room was one wide “open space” for those who had the eye to see. One could find many exciting objects and instruments for self-knowledge, mind expansion and travel.

Father Bu was the perfect travel guide. He could make you “fly” on the handle of a witch’s broom or on an astral rod. He could make you wander back to your childhood via hypnosis and confront the long-buried and forgotten. His assortment of rods could point you to directions not yet taken.

Every item had purpose

Every item in this curio shop had a purpose. The rubber snakes were for the phobic, Father Bu explained. Some toys could be converted into mediums to which spirits, vibrations and repressed impulses could transfer themselves, relieving their tormented longtime hosts.

But not to get scared, the stuff were well-behaved. When nudged, the tiny Sto. Niño danced on Father Bu’s palm. A card pulled from a pack turned up the wanted design. The rods followed one’s inner directions. The crystal balls became peepholes revealing unlikely places, people and events.

Feeling cramped, possessed, depressed, restless, directionless? Need to be a child again? Did you lose something, somebody? Father Bu’s room contained as many answers as there were objects and beings in it. But of course the most important being in Father Bu’s room was Father Bu himself.

Center named after him

Born in Lingayen, Pangasinan province, on Sept. 22, 1922, Father Bu excelled in academics at a young age. His father was a doctor and his mother a teacher. He joined the Society of Jesus in 1939 and was ordained in 1952. With a master’s degree in Experimental Psychology and a doctorate in Clinical Psychology from Fordham University, Father Bu established the psychology department of Ateneo de Manila and was one of the founders of the Psychological Association of the Philippines.

Named after him is Ateneo’s Fr. Jaime Bulatao SJ Center for Psychology Services, which offers clinical and community services, training and research.

Ateneo’s psychology department said of Father Bulatao: “He introduced group dynamics in the Philippines and wrote ‘The Technique of Group Discussion.’ He advocated the importance of understanding the Filipino psyche, and undertook studies on Filipino culture and the phenomena of spirituality and consciousness.

“As a clinical psychologist, Father Bu aimed to find the kind of therapy best suited for Filipinos, experimenting with different alternatives that combined both his knowledge of Western methods and his understanding of the local culture. He used hypnosis to understand these occurrences and other related paranormal phenomena such as ESP (extrasensory perception), clairvoyance and telepathy. Father Bu undertook experiments on altered states of consciousness and taught hypnosis and hypnotherapy. In 2000, he published the book ‘Hypnosis and Hypnotherapy.’ At the turn of the century, he devoted most of his time grounding his thoughts about relationships through numbers and quantitative methods.

“Although Father Bu received many awards and recognition for his contribution to psychology, he claimed that his best achievement was in teaching.”

His words to psychologists: “If you can get into the understanding of the mind and work with it, so you can raise and improve it and see this as part of the Kingdom of God, then this is the particular contribution that you can give to [his] Kingdom.”

He sees dead people – and they confess to him