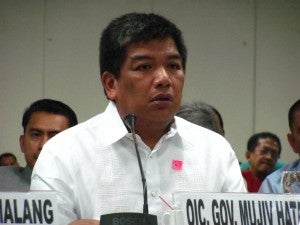 COTABATO CITY – Bringing with them food, other goods, and experts on psychosocial counseling, officials and employees of the Autonomous Region in Muslim Mindanao – along with their spouses – spent Valentine’s Day with displaced residents of Mamasapano, Maguindanao on Saturday.

“We call this Yakapayapaan,” said ARMM Gov. Mujiv Hataman, adding that the main goal of the activity was to be anti-war.

“Let us love each other,” he told the Inquirer by phone from Mamasapano.

During the visit, ARMM officials, workers and their spouses, mingled and chatted with the displaced residents to make them feel that they had not been forgotten, amid perceptions that national attention had shifted away from them in the aftermath of the January 25 incident that killed 67 people – 44 of them elite policemen.

“I personally requested them to spend their Valentine’s dates with those in need of human care, aid and guiding intervention and share them a heart to help them move on,” Hataman said.

The ARMM-Heart (Humanitarian Emergency Assistance Response Team), a two-year old special project under Hataman’s office, was the core group that led the employees’ journey to the clash site in Barangay Tukanalipao here.

There, they also visited displaced families and heirs of civilians killed in the bloody encounter.

The heirs of civilians killed or wounded in the clash received cash assistance.

Relief packs, prepared by the region’s social welfare department, were also distributed among the residents while the Department of Agrarian Reform handed over two corn shellers for the use of the communities.

ARMM Agriculture Secretary Makmod Mending Jr. said beyond bad news, Mamasapano is a farming community that is able to sustain its residents’ food requirement from its domestic level of rice and corn production.

He said the regional government wanted the town’s farmers supported with their needs for the current cropping-season and help them recover fast from the effects of the incident.

ARMM couples were also seen distributing slippers and other goods to displaced children and talked with the adults.

Experts from the United Nations Children’s Fund, the ARMM’s DSWD and Department of Education, also held psychosocial counseling sessions with children of displaced families and students.

Hataman said the January 25 incident left fear and uncertainty, especially in the hearts of children that they continue to refuse to go to class for fear of more violence.

Three weeks had passed since the incident but classes have yet to resume, he said.

“Today all roads lead to Mamasapano for the ARMM officials and employees. We are spending our Valentine’s Day here, wearing our black t-shirt emblazoned with Truth Justice and Peace. There will be no justice without truth. No peace without justice,” Assistant Secretary Pearl Dans of the ARMM’s Department of the Interior and Local Government, said.

Dans said she and DILG-ARMM Secretary Anwar Malang also met with municipal and village officials, who briefed them on the current security situation and governance in Mamasapano, a community of majority Muslims and a minority Christian population of about 10 percent.

The activity was capped by a “lunch date,” during which, the ARMM couples and the residents ate together.

“This is our version of a meaningful Valentine’s date,” Hataman added. With a report from Allan Nawal, Inquirer Mindanao