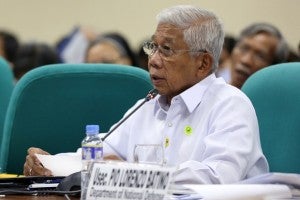 MANILA, Philippines–Defense Secretary Voltaire Gazmin on Thursday confirmed reports of a coup plot against President Aquino in the wake of the massacre of 44 elite commandos by Moro rebels that had caused tension in the military and police ranks and demands for Aquino to resign.

Responding to a revelation by Sen. Miriam Defensor-Santiago at the resumption of a Senate hearing into the Jan. 25 slaughter in Mamasapano town, Maguindanao province, Gazmin said the conspiracy was under investigation, but he expressed confidence that the military remained loyal to Aquino.

“As far as a coup d’etat is concerned, it will entail the support of the military, and we are very confident that the military will not be involved,” he told the joint hearing of the committees on public order, peace and finance.

Santiago said, “I have intelligence [data] as of yesterday that leaders of certain alphabet soup acronyms who are familiar with the public had a recent meeting because they wanted to discuss how to stage a coup d’etat, who should be installed as President, and even their contributors were there.”

A “wealthy Filipino,” she said, is behind the conspiracy.

The killing of 44 Special Action Force (SAF) troopers have sparked outrage and calls for the resignation of the President.

Claims that the Armed Forces of the Philippines failed to respond immediately to frantic calls from the Philippine National Police for assistance to the beleaguered SAF force in Mamasapano exposed a rift between the military and police that surfaced during this week’s congressional hearings.

Director Getulio Napeñas, the suspended SAF commander, has said that timely intervention of the military would have saved his commandos. The military maintained that it immediately responded to the SOS calls despite a lack of coordination between the PNP and the AFP.

Chief Supt. Generoso Cerbo Jr., the PNP spokesman, sought to downplay reports of the coup plot but acknowledged the “volatile emotions” of the policemen following the loss of the 44 commandos and the gory details of their slaughter in videos shown on YouTube.

“The PNP is sad because of what happened, we are in a state of mourning. But we have our own work. We will achieve nothing if we use that option (of a coup d’etat), because that would destroy what the SAF policemen wanted to achieve,” Cerbo said in a news briefing.

He said the PNP was confident of the professionalism of its men and women and that there was no need for a loyalty check. He appealed to the 150,000-strong force to await the outcome of a board of inquiry into the carnage.

“We hope the results of the investigation will defuse the volatile emotions,” Cerbo said.

A senior police intelligence officer, speaking on condition of anonymity, said certain personalities, including a politician, had been talking to “disgruntled” PNP officers. The officer declined to give details, saying the PNP was still verifying information.

Lt. Col. Harold Cabunoc, AFP spokesman, appealed to the public “not to glorify these attempts to divide our nation.”

“We assure the public that the AFP and the PNP are all dedicated professionals whose sole interest is to keep the peace and security of our country,” he said.

“Our soldiers will continuously support the government in helping solve our country’s problems instead of becoming part of the problem,” he added.

In Malacañang, reporters asked Communications Secretary Herminio Coloma Jr. if Aquino was aware of the plot against him.

Coloma said that the AFP was addressing “all threats to the state.” He said that Gazmin, in the Senate hearing, voiced the readiness of the military to perform its duties.

In his address to the nation last Friday, Aquino said he was responsible for the slain commandos, but had so far not fully explained his exact role in the operation to capture Jemaah Islamiyah bomber Zulkifli bin Hir, alias “Marwan,” and his Filipino cohort, Abdul Basit Usman.

Both chambers of Congress have opened separate inquiries into the bloody encounter, where at least 18 rebels and five civilians were also killed.

The SAF commandos were withdrawing from a village in Mamasapano after taking down Marwan in his hideout when they ran into a big number of Moro Islalmic Liberation Front guerrillas and Bangsamoro Islamic Freedom Fighters.

Santiago did not identify the plotters, but indicated that they had been engaged in the “cottage industry” of plotting a coup for some time.

“All these planners can be arrested immediately,” the senator told the inquiry, pointing out that the crime of coup d’etat is punishable under the Revised Penal Code.

Briefing reporters later, Santiago described the financier as the country’s “richest man.” But she declined to elaborate, except to say that he had funded coup attempts in the past.

“The most important financier is the richest man of all. I think you are familiar with who that is,” she told reporters. “He is one known to have funded similar coups d’etat in the past. That’s why you know him.”

“He’ll make a hue and cry about it, although I’m immune from libel since we’re discussing Senate matters within the Senate hall itself. I don’t want to make a big deal out of it until after the DND (Department of National Defense) is already finished with their investigation,” she said.

Santiago said that while she was a bitter critic of the President, she asserted that he should leave office “at the proper time, not by extralegal means such as a coup d’etat.”–With reports from Julie Aurelio, Marlon Ramos, Cynthia D. Balana and Nikko Dizon