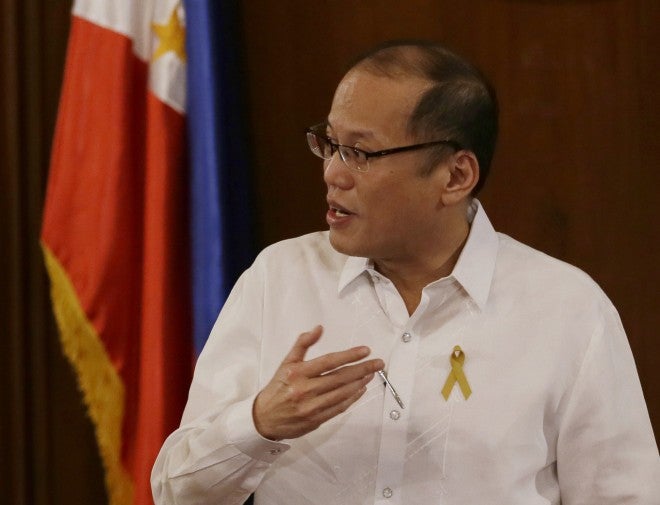 President Aquino gestures shortly after addressing the nation in a live broadcast Friday, Feb. 6, 2015 from Malacanang Palace in Manila on the botched police operation Jan. 25 to capture a terrorist that resulted in the killing of 44 elite police commandos in Mamasapano, Maguindanao. Aquino believes that with an undermanned team tasked to get Malaysian terrorist Zulkifli bin Hir and with the two-hour delay in the arrival of the blocking teams in their proper positions, the Philippine National Police Special Action Force should have aborted “Operation Exodus.” AP PHOTO/BULLIT MARQUEZ

MANILA, Philippines–President Aquino believes that with an undermanned team tasked to get Malaysian terrorist Zulkifli bin Hir, alias “Marwan,” and with the two-hour delay in the arrival of the blocking teams in their proper positions, the Philippine National Police Special Action Force (SAF) should have aborted “Operation Exodus.”

The conditions were established in the initial PNP investigation and were part of the presentation by PNP Director Benjamin Magalong, head of the board of inquiry (BOI), at the congressional inquiries.

In his national address last Friday, President Aquino said his personal inquiries into the incident showed that “there were no fewer than three separate instances when the mission could have been aborted or postponed, or when the plan could have been dramatically changed.”

According to the source, the following were the three things that caught the President’s attention:

— Only 13 of the original 38 members of the SAF 84th Special Action Company (SAC) or Seaborne, the US-trained, most elite of the SAF, were able to cross the river going to the hideout of Marwan and his Filipino deputy, Abdul Basit Usman, in the early hours of Jan. 25.

— The 55th SAC was two hours behind the original appointed time of rendezvous with the 84th SAC, which by then had already accomplished the mission, and was already on the withdrawal phase. The original plan showed that the 55th SAC should have been at its “way point” or guide point position at 2:30 a.m., but it arrived at 5:30 a.m.

— As a result, the series of other SAF units that should have made up the entire blocking force to safeguard the exit of the Seaborne were unable to take their positions. The officers of 55th SAC got pinned down in a cornfield where they were spotted by hostile forces.

In his speech, President Aquino emphatically asked why the mission proceeded “when it deviated so far from the original plan, and our troops were already in grave danger.”

“These, and many others, are the questions that plague my mind. The former SAF commander [Director Getulio Napeñas] will have an opportunity to answer these, and explain himself, in the appropriate proceedings,” Aquino said.

The President said “there was an even greater need” for adjustments in the mission “especially since [Napeñas] was well aware that no coordination had taken place regarding expected assistance, and since the Armed Forces could render little aid, if at all, because they were not given sufficient time to prepare.”

The SAF commandos killed Marwan during “Operation Exodus,” but Usman escaped. The 44 SAF troopers were killed in gun battles with Moro guerrillas.

Widespread public anger over the deaths of the commandos has stopped discussion in Congress of the proposed Bangsamoro Basic Law, which would establish a new autonomous region for Muslims in Mindanao.

The Bangsamoro charter is a priority measure of President Aquino, who has made peace in Mindanao one of the cornerstones of his administration.

Aquino briefed on ‘Oplan Exodus’ to get Marwan – Napeñas