QC’s serial robbery-rapist suspect falls, is greeted with a punch by Mayor Bautista

MANILA, Philippines – Quezon City Mayor Herbert Bautista was at it again on Thursday, showing up at the scene of arrest and dishing out a handcuffed crime suspect an unforgettable trauma.

The Quezon City Police had arrested 29-year-old Mark Soque, a robbery-rape suspect who made headlines last week for his outrageous modus operandi. 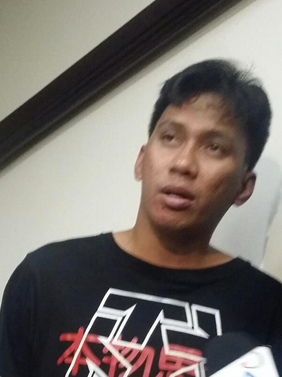 Before he was presented to the media, Bautista reportedly walked into the investigation room and welcomed Soque with a punch in the head and a kick in the body before the mayor went away.

Bautista, however, later denied that he punched and kicked the suspect but admitted that he felt pity for the victims who positively identified the suspect

It was not the first time Bautista hurt an arrested crime suspect.

In August 2014, Bautista slapped a suspected Chinese drug dealer after being arrested in an anti-drug operation.

Pagdilao said they received information that Soque was spotted in front of the Ever Gotesco Mall in Commonwealth, Quezon City around 10:30 a.m. and was about to pull another robbery.

The suspect was tagged in the shooting to death of a female Korean national, Park Mi-kyung, and involvement in several other robbery-holdup incidents in Quezon City.

Eight robberies in Quezon City attributed to the suspect—three of them pulled off with an accomplice—started on Dec. 23 at Genilo Dermasolutions, a skin clinic on Maginhawa Street, UP Village.

Soque, a Commonwealth resident, owned up to the heists although he denied raping three of his victims.

According to him, it was his partner in crime—who remains at large—who raped the women and shot Park in the head after she walked into a café they were robbing on Feb. 9.

His denials, however, crumbled when he was positively identified by some of his victims, including one of the raped women. With a report from Jaymee T. Gamil