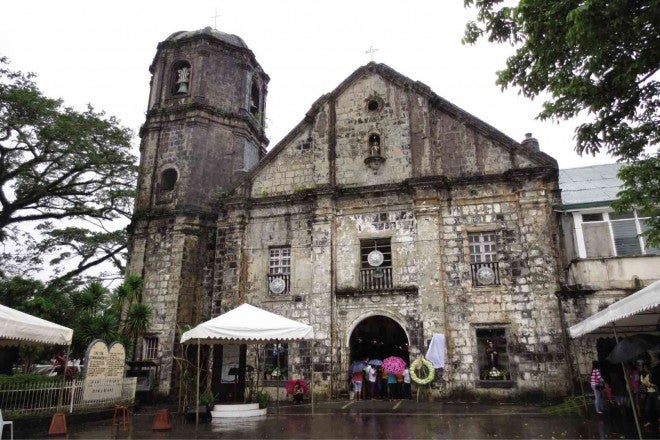 ST. JOHN the Baptist Church, which was built by Franciscan missionaries during the Spanish colonial period, in Camalig, Albay, has been declared a historical landmark by the National Historical Commission of the Philippines. MICHAEL B. JAUCIAN

Imelda Moraleda has bound her life and faith to the massive stone church built by Franciscan missionaries during the Spanish colonial period in the 1800s in Camalig town in Albay province.

“The church is indeed a very old church … that provided us refuge during the war,” says Moraleda, 84, who goes regularly to the St. John the Baptist Church, which was recently declared a historical landmark by the National Historical Commission of the Philippines (NHCP).

Describing the place of worship as “God-given,” she recalls that during World War II in 1942-1945, it sheltered town residents during the Japanese occupation and when the Americans came to liberate the country.

She was a teenager then during the war years and was asked to play the piano during the daily Mass, while Japanese soldiers watched the parishioners’ every movement. “There was no way to escape the garrison of the Japanese soldiers, which was just located at the back of St. John the Baptist Church,” she remembers.

The NHCP’s board of commissioners approved the declaration of the church as a historical landmark after noting its significant contributions to Camalig’s history.

“The marker is very educational on the part of the tourists as it will give them an idea of how Christianity started,” said the agency’s executive director, Ludovico Badoy, who attended the unveiling ceremony on Dec. 14, 2014.

The Franciscan missionaries administered the church for over 400 years, from 1579-1983, according to the marker. Originally, it existed as a structure of wood and nipa from 1579 to 1580.

The second church was made from stone by prisoners in 1605. It was, however, destroyed by successive eruptions of Mayon Volcano from 1766 to 1814.

Two priests, Francisco Latoba and Manuel Brihuega, helped rebuild the church in 1837. Construction of the front portion, bell tower and Escuela Catolica was supervised by Fr. Miguel Barcela in 1845.

The present church, which dates back to this period in the 1800s and made out of solid blocks of lava rocks by hundreds of stonecutters, has also survived several typhoons. It is touted by the Department of Tourism as “one of the strongest and massive churches in the Bicol region.”

Jed Villanueva, Camalig tourism officer, credits the initiatives of the local government and the Diocese of Legazpi for the NHCP declaration.

Bishop Joel Baylon of the Diocese of Legazpi says the marker would serve to remind the people on the efforts of the early missionaries and of “the church’s important role in culture, society and in the lives of the people of Camalig.”

It is the third religious-historical landmark to be declared by the NHCP in Albay province, according to Eleanor Samonte, NCHP senior history researcher. The two other churches are the St. John the Baptist in Tabaco City and the Our Lady of the Gate Parish in Daraga town, whose marker was installed on Oct. 16, 2008.

Gov. Joey Salceda says he is working on 30 historical sites in the province, mostly churches, in the towns of Tiwi, Sto. Domingo, Bacacay, Guinobatan and Oas, which could be counted as cultural heritage sites in Albay.

“The province has set aside some P35 million for the protection and preservation of its vast cultural heritage sites,” he says.

Camalig Mayor Carlos Irwin Baldo says the NHCP marker on the St. John the Baptist Church would help spur tourist arrivals to the otherwise sleepy town, more known for its pinangat, a popular Bicolano dish made from taro (gabi) leaves.

Moraleda, who still goes to the church regularly, says the commission did the right thing in considering the church part of the cultural treasure of the town and in choosing the right place to install the marker.

Ceres Lim, 69, also believes that the church will continue to play its role of enhancing and deepening the residents’ faith in God.

For Rafael Villavicencio, 77, who has been serving as lay minister for the past 26 years, the NHCP declaration will strengthen the religious fervor of the people of Camalig.

The church is a clear proof of Christianity’s deep roots in Filipino culture, he says.