MANILA, Philippines – Philippine National Police officer in charge Leonardo Espina on Wednesday broke down in tears as he recalled the brutal killing of the members of the Special Action Force (SAF) amid finger-pointing during the House of Representatives’ probe on the Mamasapano incident.

Espina emotionally recounted how Moro rebels shot to death some of his anti-terror commandos as they lay wounded in a fierce gunbattle in Mamasapano last January 25.

Espina castigated the Moro fighters for slaying their men despite the peace deal with the government. 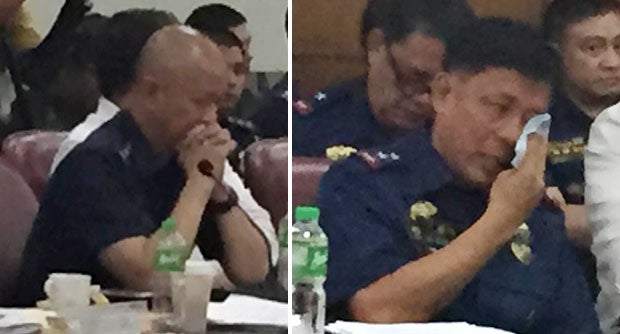 Espina also expressed frustration with Zamboanga City Rep. Celso Lobregat’s question if the operation in Mamasapano was legal or not.

“Tinatanong pa natin bakit legal? Tapos you will blame coordination to justify the killing of my men?” he said.

He said he hopes the congressional probe could yield answers so that when he meets the 44 slain SAF men in another life, he could provide them answers.

“I seek answers for my people. So that when my time comes, I can face my people and at least I can say something. It is always sweet to die for this country. Itong mga taong ito will always be there in your front and say ‘Mission accomplished,'” Espina said.

“Sana nga sinasabi ko kasama ako dun eh personally, so I can lie down before them and say ‘mission accomplished.’ Inuulit namin, we are all for peace. Sagutin niyo lang ako so that when we face all of them in heaven, I can tell them what happened,” he added.”

Sacked Special Action Force commander Getulio Napeñas approached Espina to console him and openly wept. Then he leaned his head on the shoulder of Espina, who tapped his subordinate on the head.

Espina then stood up and hugged Napenas, who went back to his seat wiping his eyes with his handkerchief.

Twenty other commandos were shot in the head, Espina said, even when it was clear they were government policemen.

The Moro Islamic Liberation Front rebels have said the fighting was a “misencounter” because the police commandos did not coordinate the anti-terror raid with them. They said they were unaware that Marwan and a suspected Filipino bomb-maker, Abdul Basit Usman, were hiding in their Mamasapano stronghold.

The slayings have cast uncertainty over the draft of a law creating an autonomous region in the southern island of Mindanao as part of a peace plan aimed at ending a four-decade rebellion.

The government had hoped it could become law by March to have time for a plebiscite and the creation of the region’s transition authority before President Benigno Aquino III ends his term in 2016.

Government chief peace negotiator Miriam Coronel-Ferrer told a forum despite the delay, they still hope Congress can approve it before the current session ends in May, and the plebiscite held September or October. But she said that would leave little time before the start of the election period, when Aquino would be banned from appointing members of the region’s transitional authority. With a report from Associated Press