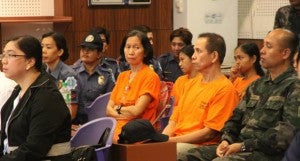 MANILA, Philippines—Two lawyers groups on Tuesday protested the transfer of the trial of alleged Communist Party of the Philippines leaders Benito Tiamzon and Wilma Austria-Tiamzon from the Quezon City Regional Trial Court (RTC) to Camp Crame.

The National Union for People’s Lawyers (NUPL) and the Public Interest Law Center described the transfer—ordered by the Supreme Court on the request of the judge—as “unilateral” and an overreaction to a protest action held during the last hearing at the Quezon City Hall of Justice.

“Such a unilateral move is not only an overreaction to a legitimate and peaceful rally by peasants seeking the release of political prisoners but is also clear reprisal for a valid exercise of a basic constitutional right,” NUPL secretary general Edre Olalia and NUPL managing counsel Rachel Pastores said in a joint statement.

Olalia and Pastores also expressed apprehension over the holding of the trial in what they described as a “police fortress under very hostile conditions and atmosphere and beyond open scrutiny.”

“[It] is inconsistent with the minimum requirements of due process mandating a fair and impartial trial that require a public hearing. The state has all the power and resources to continue the previous security arrangements that had worked just fine prior to such an unreasonable transfer,” they said.

The transfer was also “not conducive to the search for truth as witnesses for the defense will be intimidated by the overbearing presence of scores of police and intelligence personnel enjoying a home court advantage to the exclusion of the general public,” they said.

The pretrial for the case of kidnapping was held at the Philippine National Police Training Center yesterday morning.

The change in venue was apparently prompted by a rally held by the Tiamzons’ supporters which caused the shutdown of the QC Hall of Justice on Oct. 21.

The venue change was ordered by the Supreme Court in a notice issued on Nov. 25, acting on a request from QC RTC Executive Judge Fernando Sagun Jr.

Olalia said the change in venue was done to prevent a repeat of the trouble that attended the last hearing at the QC Hall of Justice on Oct. 21.

Activists calling for the release of the Tiamzons mobbed the hall, prompting police to shut the building down, and for Sagun to call for the suspension of the building’s operations for the day.

The reason for the venue change was confirmed by QC RTC Branch 81 Judge Madonna Echiverri at yesterday’s hearing, where she recalled that people were banging on her courtroom’s windows during the Oct. 21 hearing, Olalia said.

Olalia protested that the defense camp was only informed of the venue change when they received Echiverri’s notice about it on Jan. 30.

He said the banging on the courtroom’s windows was not done by protesters, who were shut out of the hall of justice, but by the Tiamzons’ police guards who were asking to be let into the courtroom.

“We were never given a chance to explain our side and refute the reason for the venue change,” he said.

Tuesday’s pretrial hearing was deferred to April 15. Olalia said the defense will file a motion for reconsideration in the Supreme Court over the venue change.

The Tiamzons are being tried for the abduction of five soldiers and one Philippine Narcotics Command member in 1988.