Roxas: Had I been informed, I’ll ensure my men are battle-ready | Inquirer News

Roxas: Had I been informed, I’ll ensure my men are battle-ready

MANILA, Philippines – Had Interior Secretary Mar Roxas known about the police operation intentionally kept from him, he would have ensured that the equipment of the Special Action Force troopers were adequate and in good condition before launching the mission.

“If only there had been a coordination, I would make sure that my men will go to the battle ready,” Roxas said during the Senate hearing on the Mamasapano clash that killed 44 elite cops. 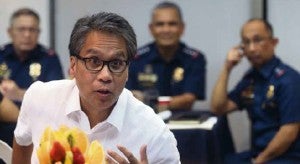 He said if he were informed of the “Operation Exodus” against Malaysian terrorist Zulkifli Bin Hir or Marwan, he would have coordinated fully with Defense Secretary Voltaire Gazmin.

The time-on-target coordination, according to Roxas, only applies to “certain operations.”

“But operations such as this clearly in a hostile area surrounded by hostile forces in thousands, all armed?”

Poe lauded Roxas for “being calm and fulfilling his responsibility” despite being left out in the planning of the mission.

When asked by Poe to tell the Committee his insights on the poor coordination, he said: “My question is, and I respectfully ask this, there was no coordination; but they were calling for SOS.”

“What happened at 6 in the afternoon, 5 p.m., and 4:30 p.m. when you were able to deploy three white phosphorous that we can’t do at 2 in the afternoon, 12 noon, 10 in the morning when there were still no coordination?”

Meanwhile, Senator Francis Escudero asked the Secretary how the government could bring justice to the slain 44 men and their families, to which Roxas said they need “closure.”