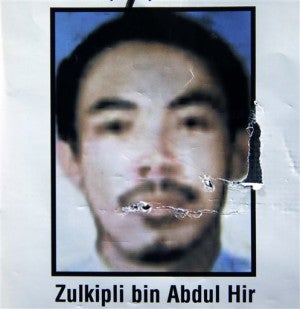 This undated file photo from a Philippine National Police wanted poster shows Zulkipli bin Abdul Hir, a Malaysian national and one of the most wanted terrorists in Southeast Asia, also known as Marwan, who is the object of a manhunt by elite police commandos but was in turn killed by Muslim guerrillas Sunday, Jan. 25, 2015 in Maguindanao province in southern Philippines. Philippine officials have removed the commander of a police special action force from his post after at least 44 anti-terror commandos were killed in a clash with Muslim rebels in the province. (AP Photo)

MANILA, Philippines — Armed Forces of the Philippines chief General Gregorio Catapang Jr. admitted in a Senate hearing on Tuesday that they had been getting information that the Moro Islamic Liberation Front coddled top terrorists Zulkifli bin Hir alias Marwan and Basit Usman.

“We are receiving information sometimes, but it’s not sure,” Catapang said.

The two terrorists were the target of an operation by the Special Action Force on January 25 in Mamasapano, Maguindanao.

Marwan was killed in the operation but Usman escaped. The botched operations also resulted in the deaths of 44 police officers.

Catapang said the two terrorists are being accommodated in the lair of the Bangsamoro Islamic Liberation Fighters in exchange for training.