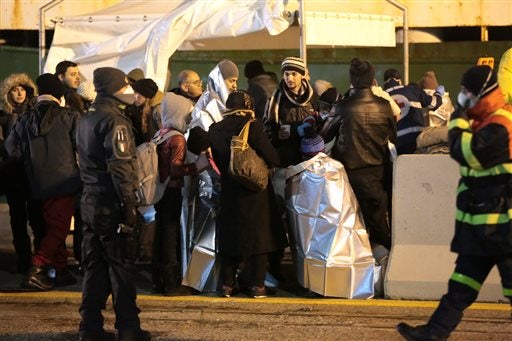 In this Jan. 3, 2015 file photo, migrants wait after disembarking from the cargo ship Ezadeen, carrying hundreds of migrants, in the southern Italian port of Corigliano, Italy. AP

MILAN— The Italian coast guard says 27 migrants have died at sea from hypothermia while traveling from North Africa to Italy aboard a smuggler’s life raft.

Italian Coast Guard commander Filippo Marini said Monday the victims were among more than 100 people packed aboard an inflatable life raft who were trying to cross the Mediterranean in rough seas and freezing temperatures. The migrants had summoned help via satellite telephone 100 miles (160 kilometers) off the coast of the southern Italian island of Lampedusa.

Since the beginning of 2014, more than 150,000 migrants have arrived in Italy on unseaworthy boats, many refugees of war and conflict.