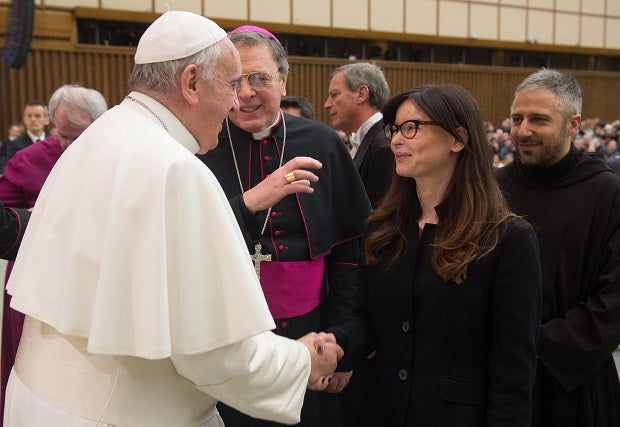 In this photo taken at the Vatican on Feb. 4, 2015, Pope Francis shakes hands with Italian lawyer Lucia Annibali during the weekly general audience in the Pope Paul VI hall, . Annibali, became a symbol in the fight against men’s violence toward women, after suffering in the 2013 an acid attack masterminded by her ex-boyfriend Luca Varani, also a lawyer. Varani has been convicted and sentenced to 20 years in prison for ordering the attack on his ex-girlfriend. Two Albanian men were convicted of throwing the acid and each received a 14 year term. On saturday in a speech, Francis decried disfiguring attacks on women. AP

VATICAN CITY — Pope Francis has decried disfiguring attacks on women, sometimes by their own companions.

Addressing a Vatican group which explored how women are viewed culturally, Francis on Saturday praised the “beauty and harmony of the body God gave women.” Then he lamented “the painful wounds inflicted on them, sometimes with savage violence, because they are women.”

On Wednesday on the sidelines of his public audience, Francis shook hands with an Italian woman, Lucia Annibali, whose face was badly disfigured by acid. Her ex-boyfriend was convicted of masterminding the attack. Annibali campaigns to encourage women to bring their attackers to justice.

Francis in his speech said “the feminine body, symbol of life, is unfortunately not rarely attacked and disfigured, even by those who should be their custodians and lifetime companions.”