MANILA, Philippines–They all answer to the name catastrophe.

The weather bureau has replaced the names of five destructive tropical cyclones that hit the country last year even if doing so cannot erase their identities entirely.

According to the Philippine Atmospheric, Geophysical and Astronomical Services Administration (Pagasa), the decommissioning of Typhoons “Glenda,” “Jose,” “Mario,” “Ruby” and “Seniang” is part of the agency’s standard procedure of retiring names of cyclones that have caused the most damage.

Pagasa also enforces a rule that replaces cyclone names that tend to be ridiculed on the premise that weather disturbances are no laughing matter.

Considered 2014’s most destructive typhoon to make landfall, Glenda passed through Southern Luzon, brushing past other parts of Luzon, including Metro Manila and Central Luzon, with maximum winds of 165 kilometers per hour and gusts of up to 250 kph.

Malano said “Josie” will be used in place of Jose (Halong), which hit the country from Aug. 2 to 7 last year, killing two people and destroying an estimated P1.6 billion worth of property.

Mario (Fung-Wong) will be replaced with “Maymay,” which hit the country from Sept. 17 to 21 and caused the death of 18 people, left four others missing and injured 16 when it brought heavy rains to most parts of Luzon, including Metro Manila. Mario also destroyed approximately P3.4 billion in property and infrastructure.

Ruby (Hagupit) will be retired in favor of “Rosita.” Ruby left 18 people dead and 915 others injured when it hit the country from Dec. 4 to 10. The typhoon also destroyed some P3.35 billion in property.

“Samuel” will replace Seniang (Jangmi), which hit from Dec. 28 to 31, killing 66 people and leaving six missing. The typhoon also destroyed property amounting to some P1.27 billion.

Malano said decommissioning names from the list of tropical cyclones entering the Philippine area of responsibility (PAR), initially generated in 1999 from a “Name a Bagyo” contest,” depends on the cost of damage in property and infrastructure, which is at least P1 billion or over 300 lives lost based on the damage and casualty report from the Office of the Civil Defense.

“Retiring names of destructive typhoons from the operational list is a systemized practice of the agency. Replaced names are still recorded for historical data or for future reference,” he added.

Pagasa keeps four sets of tropical cyclone names that are rotated every four years plus 10 auxiliary names starting from “A” to “J” for each rotation should the number of tropical depressions, storms or typhoons that enter the PAR go beyond 20 in a year.

Among the names that earn snickers, “Kanor” was dropped last year from the list of tropical cyclone names in favor of “Karding” because the former generated “negative thoughts” and giggles from the public who are familiar with the videotaped sexual adventures of a “Mang Kanor.” Names that are associated with prominent politicians or celebrities are also avoided. 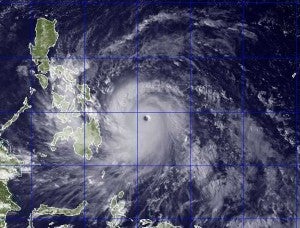 This image provided by the US Naval Research Lab shows Typhoon Haiyan(local name, Yolanda) taken by the NEXSAT satellite on Nov. 7, 2013 at 2:30 a.m. EDT.  AP

In coming up with replacement names, gender-sensitivity practices in government offices are being enforced so that both masculine and feminine names as well as those of inanimate objects are being used.

What has become a tradition of naming tropical storms after women started in the mid-20th century when American weather forecasters named cyclones after their wives or girlfriends.

In 1963, Philippine meteorologists started assigning feminine nicknames ending in “ing” to the cyclones that entered the PAR and followed the original 19 basic letters in the Filipino alphabet. The practice stopped only in 2000 after the weather bureau was able to generate names from entries sent by the public for its cyclone-naming contest the previous year.

Typhoon “Yolanda” (Haiyan), the monster cyclone that caused massive death and destruction in the Visayas in November 2013, was replaced with “Yasmin.”