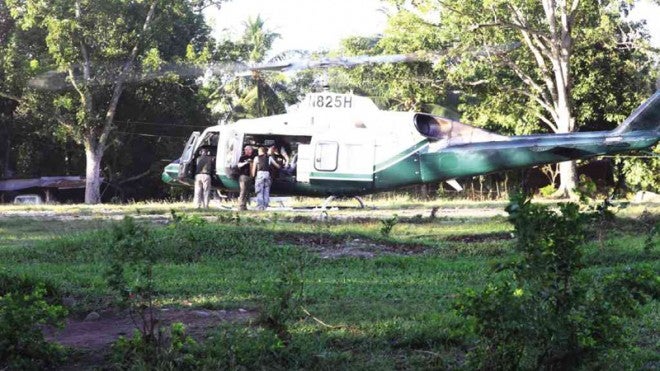 U.S. AID US forces use their helicopter to airlift Philippine police commandos wounded in a clash on Jan. 25, 2015, with Moro rebels from the Shariff Aguak Provincial Police command to a hospital in Camp Siongco in Datu Odin Sinsuat. FERDINAND CABRERA/Contributor

MANILA, Philippines–They were not alone. Big Brother was up there monitoring their every move.

“Kasalukuyan pong nag-e-encounter ang 5th Battalion sa Maguindanao para sa misyon kay Marwan” (The 5th Battalion is right now engaged in a mission in Maguindanao against Marwan), an officer from the assault team said, recording what was happening on the ground about 8 in the morning of Jan. 25 in Mamasapano, Maguindanao.

He then apparently tilts up the camera of his cell phone: “The drone is circling.”

Malacañang and the United States Embassy have not addressed the rumors of US participation in the Mamasapano operation that targeted the most wanted terrorist in Southeast Asia, Zulkifli bin Hir, alias “Marwan.”

But with a more-than-two-minute video on his phone, a member of the assault team of the Philippine National Police Special Action Force (PNP SAF) captured on film proof that a drone, or an unmanned aircraft, believed to be from the US forces in the Philippines was at the scene that day.

The drone is believed to have originated from the US drone facility in Zamboanga City.

According to retired PNP Gen. Rodolfo “Boogie” Mendoza, drone utilization is basically a counterintelligence technology that is “very effective and can pinpoint accurate locations.” Mendoza is president of the Philippine Institute for Peace, Violence and Terrorism Research.

The video would also tend to validate the claim of a source who earlier this week told the Inquirer that the United States, which he said had “an obsession with Marwan,” had fully funded and provided the training for the Mamasapano operation. He said the whole operation had been planned in a secret facility inside La Vista de Mar Resort in Zamboanga, where Americans reportedly operated a facility and where members of the 84th SAF company were trained for the operation against Marwan.

Forty-two members of the main assault force assigned to get Marwan came from the 84th SAF, and 36 from the 55th SAF served as the blocking force. In all, 392 SAF commandos were sent to Mamasapano. Forty-four ended up dead, 35 of them from the 55th SAF.

The source said the Americans were focused on the 84th SAF because they had the tissue sample of Marwan. After killing the terrorist, the assault team had cut off his right index finger to be used for DNA confirmation.

He said the Americans had used a drone to monitor the exact location of the 84th SAF. “This is why even if the 84th SAF men were located deeper in the area, only a few were killed. But the 55th SAF lost all but one of its men because no help from the Americans arrived,” he said.

The two-minute video shows one of the SAF officers who was killed that day was still alive about 8 a.m.

There was heavy fighting from a distance of about 500 to 800 meters, from which the assault team initially managed to stay undetected.

In the video, members of the assault team could be seen smiling and in apparent high spirits, with one of the SAF members commenting, “ang maligalig kong boss” (my restless boss), in reference to his superior officer who took the video with his cell phone.

Marasigan, one of the commandos from the assault team who survived the slaughter, explained that the team tried to approach the trapped officers and members of the beleaguered 55th SAF blocking force but he said the enemy’s massive force was just too enormous.

By 11 a.m., the location of the assault team was detected. Nine of its members were killed and 11 wounded.

The United States through the US Embassy has only admitted to helping in the retrieval of the injured commandos. Americans in civilian clothes were seen in Maguindanao and on board the private helicopter that carried out the retrieval but as to which agency they belonged, there was no clear statement from the United States.

Asked by this reporter what they thought about the rumored participation of the United States, Marasigan said: “Whether there is US or no US help is irrelevant. Marwan is a very dangerous man and we were all one in our mission to get him. Any government is right in targeting to neutralize a person like Marwan.”

“We went there knowing the risk, knowing that some of us may never return alive to our families. We did it not because of any help or any bounty for Marwan. Our comrades died not in vain, true heroes, true warriors, not fallen, because they knew the extreme risk involved,” he said.

Since January 2014, the entire elite SAF force was asked the same question almost every day: “At the end of the day, what makes you happy?”

US role in Maguindanao operation questioned