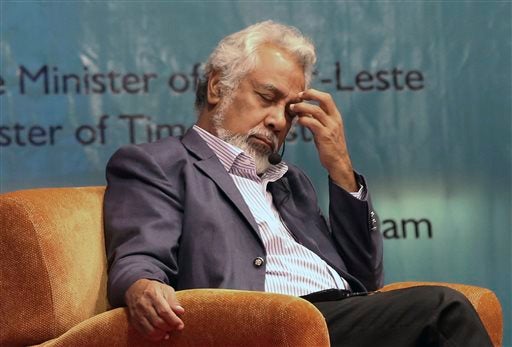 DILI, East Timor—East Timor independence hero Xanana Gusmao resigned as prime minister Friday, stepping down ahead of an expected restructuring of the government next week.

The former guerrilla leader spearheaded East Timor’s drive for independence when Indonesian rule ended in 2002. He was the new country’s first president, holding that position from 2002 until becoming prime minister in 2007.

East Timor voted overwhelmingly in 1999 to end 24 years of brutal Indonesian occupation that had left more than 170,000 dead, but the country has struggled to develop economically. About half of its 1.2 million people live in poverty.

Speaking after a meeting with the president, Gusmao told reporters, “I call for East Timorese people to accept and support my decision.”

An adviser to Gusmao, who did not want to give his name because he’s not authorized to speak publicly about the resignation, said Gusmao felt now was the time to pass the responsibility of governing to the next generation.

A government restructuring is expected to be announced next week in which the Cabinet would be reduced from 55 to 34 ministers and would become more inclusive, with opposition members among those appointed.

“Recently the prime minister encouraged all members of government to work calmly in this time of transition until the new government is sworn in,” the statement said.

Gusmao did not rule out staying in the government in a different role, saying that would depend on the new prime minister.

Mariano Sabino, the spokesman for the coalition of three political parties supporting the government, said the parties agreed with his decision to resign. He said an announcement of the new prime minister to lead the country for the next two years would most likely be made Sunday or Monday, followed by a swearing-in ceremony.

Former president and Nobel Peace Prize winner Jose Ramos-Horta was not expected to be in the new government, the adviser said.

East Timor was a colony of Portugal until it declared independence in late 1975. It was then invaded and occupied by Indonesia until a UN-backed referendum in 1999 led to it becoming a sovereign state on May 20, 2002.