‘We had lost hope’—SAF survivor 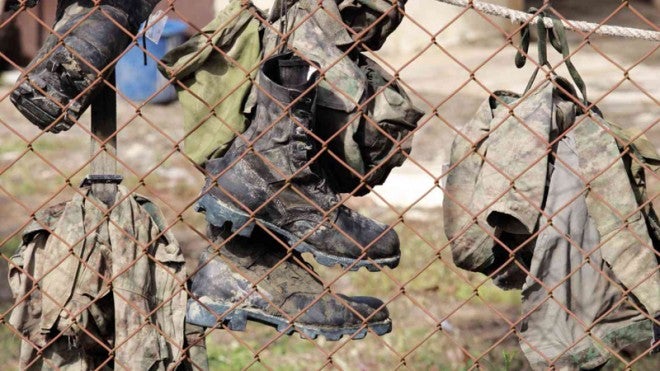 PANABO CITY – “We finally said goodbye to each other because we had lost hope that any help would come,” said a survivor of the bloody Maguindanao clash while recounting the last eight hours of SPO1 Lover Inocencio who died amid heavy fighting and while enemy troops closed in on them.

Tebbeng and Inocencio were with the strike force that killed terrorist Zulkifli bin Hir, alias Marwan, on January 25, 2015, but were pinned by enemy fire in a corn field in Mamasapano town before being rescued.

The survivor, a Muslim, delivered a tribute to Inocencio at the San Pedro Chapel here shortly before the fallen SAF commando was laid to rest Wednesday.

Later, he told reporters that the other group that was tasked to secure their exit was wiped out.

He said it was only during the last hours of fighting, when they were already cornered by the enemies, that Inocencio first got hit.

Tebbeng said Inocencio was still alive and fighting at 3 p.m. when a bullet struck him.

But despite his wound, Tebbeng said, Inocencio kept on fighting until a quarter to 4 p.m., when the team felt the enemy was getting closer. No reinforcement was in sight, and they felt they were fighting their last fight.

“Walang nang iwanan,” Tebbeng remembered the last frenzied moment when they took out all their magazines.

Tebbeng said medics were still tending to Inocencio when another burst of gunfire came their way and they had to say goodbye.

“Except for God, help was not coming anymore,” he said, adding they felt they were already being surrounded.

The SAF member said they were pinned down and had no way of concealing themselves or their movements.

“We never expected to live,” he said, “We, the survivors, consider this our second life, it was only God who helped us during that time, if God did not help us, I wouldn’t be here talking to you,” he said.

He saluted Inocencio, whom he described as a brave and brilliant man, a recipient of honor for bravery and numerous recognitions from the Philippine National Police and the Armed Forces of the Philippines for his work for the SAF over the last 12 years. He and Inocencio graduated from the SAF training in 2002.

Tebbeng said the capture and death of Zulkifli bin Hir, also known as “Marwan,” who was on the US list of international terrorists with a bounty of $6 million, saved the lives of many innocent people, making the death of Inocencio and 43 other SAF commandos “heroic.”

Lipa Archbishop Ramon Arguelles, in his homily during the requiem mass for Inocencio, said he could not understand the heavy loss of lives as he extended sympathy to the families of the victims.

Arguelles, who had earlier called President Aquino to resign because of the botched operation, said no amount of money could replace a father, a husband, a son who got killed in the operation.

“I heard that P1 million has been shelled out for each of the families of the 44 commandos,” Arguelles said. “What I know is the P50 million being enjoyed by some of our leaders in power just to destroy our justice system,” he said.

“Money would not be enough to replace the loss of a father, a husband, and a son to the families they left behind,” said Arguelles. “It’s not enough if the intention is to cover up the mistakes of the most powerful people responsible for the loss of lives,” he added.

“If they really made mistakes, that’s not enough payment. Lover was a hero, the 44 fallen SAF commandos were heroes,” said the archbishop, who also used to serve as a military bishop.