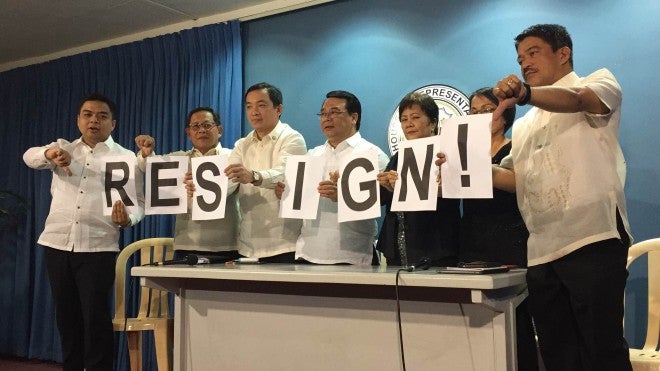 The Makabayan bloc called for President Aquino’s resignation over the Mamasapano carnage that left 44 members of the Special Action Force killed in a botched operation. They also urged the lower House to renew the junked impeachment rap against Aquino over the latest Supreme Court ruling on the Disbursement Acceleration Program. Photo by Marc Jayson Cayabyab/INQUIRER.net

This means the impeachment complaint against Aquino, junked for lack of substance September last year by the House justice committee, should now hold water.

Colmenares said the House panel, dominated by Aquino allies in the chamber, junked the impeachment complaint over DAP because the high court then has yet to rule on the motions for reconsideration filed against its earlier ruling on the program’s constitutionality.

Act Teachers Rep. Antonio Tinio said the committee report was not yet opened in the plenary for the House to formally approve the junking of the impeachment.

Aquino faced three impeachment complaints over DAP as well as the Enhanced Defense Cooperation Agreement, all of which were later junked by the committee dominated by administration allies.

Colmenares said a one-third vote in the plenary, or 97 of the 290-strong chamber, is needed to reverse the committee report and reopen the impeachment complaint.

For his part, Speaker Feliciano Belmonte Jr. stuck to the justice committee’s report that the impeachment complaints were baseless.

He said the SC ruling on DAP was more positive than the previous one because it acknowledged the economic gains reaped using the program of cross-border transfer funds by the executive.

“The ruling of the SC in DAP was in the right direction. The ruling took note that there was progress because of DAP… I’m very happy with the ruling because it clarified what can and cannot be done. It did not leave the executive with hands tied as the first one had done,” Belmonte said.

In its latest decision, the Supreme Court reaffirmed its earlier decision declaring as illegal the practice of cross-border transfer of funds from the executive, as well as the withdrawal of unobligated allotments before the end of the fiscal year. The high court, however, said DAP-funded projects before the SC decision can now remain valid.

Read Next
House of Representatives pays homage to SAF 44
EDITORS' PICK
‘NCR Plus’ to be under MECQ starting April 12 until April 30 — Palace
Pru Life UK receives four golden arrows for solid corporate governance
Pre-order the new vivo Y20s [G] to get a free TWS earphone
Malls adjust ‘NCR Plus’ operating hours for April 12-30 MECQ
Speed up your game with the new vivo Y20s [G]
Metro Manila to have shortened curfew hours from 8 p.m. to 5 a.m. under MECQ
MOST READ
Stop ‘creeping occupation’ of ‘militia’ boats in WPS, Pacquiao asks China
Bea Alonzo clarifies status of her relationship with Dominic Roque
Convicted former aide of Sen. Bong Revilla dies — BuCor
Locsin to China: ‘Then move out’
Don't miss out on the latest news and information.