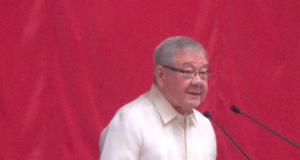 MANILA, Philippines—Speaker Feliciano Belmonte Jr. on Wednesday defended the prerogative of Congress to hold public inquiries on the bloody Jan. 25 clash between police commandos and Muslim rebels, on top of independent probes launched by other bodies.

“Some are saying there’s a whitewash. No, we want to go through with this. We want to see it to its [logical conclusion],” he told reporters in a chance interview.

The public order and safety committee chaired by Negros Occidental Rep. Jeffrey Ferrer began its probe on Wednesday to ferret out the truth behind the encounter, which led to the deaths of 44 Special Action Force troops and 18 Moro Islamic Liberation Front fighters.

“Really all sorts of interesting facts have been creeping out slowly, and we want to put them all together during our investigation,” Belmonte said.

At least eight separate probes, including those by the Philippine National Police, both houses of Congress, the National Bureau of Investigation, and the Commission on Human Rights, have been launched or planned, raising concerns of “too many cooks spoiling the broth.”

Belmonte said the House has passed the appropriate resolution to probe the Mamasapano clash in Maguindanao, and that investigation, in aid of legislation, fell within its mandate to investigate.

As for the proposed truth commission, he said a law would have to be passed to create it.

“A truth commission will take longer. First you need to organize it … You have to determine the procedure, selection of people, whether it’s recommendatory, budget source and all of those questions,” Belmonte said.

“As far as I know, nothing has been filed in the House. But in the meantime, we need to continue this scheduled investigation on Wednesday,” he said.

Belmonte earlier proposed that a truth commission be jointly convened by the House and the Senate to save on time and for convenience on the part of invited witnesses.

“Well, I have not talked to the Senate President. I think it’s a great idea. If we cannot do [a truth commission], we will have to do [the committee hearing] next Wednesday,” he said.