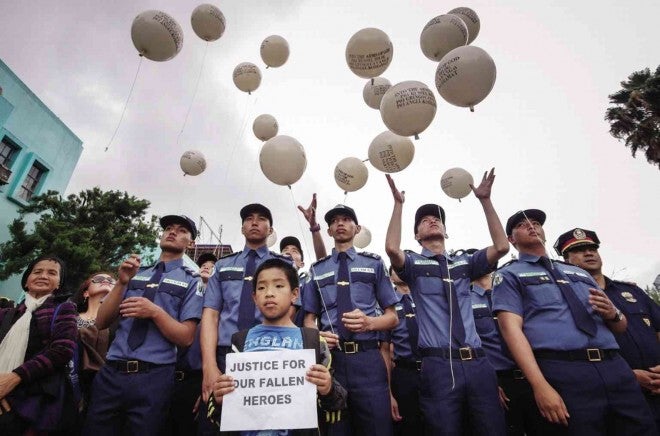 CORDILLERA policemen and trainees march in La Trinidad, Benguet, to demand justice for the 13 Special Action Force personnel in the region who were killed in a clash with Moro rebels in Maguindanao. RICHARD BALONGLONG

When news came out that Cordillera police officers were among the 44 members of the Special Action Force (SAF) who died in a clash with Moro rebels in Maguindanao last week, the subsequent eulogies praised their “warrior spirit and daring,” often citing the upland cultures that bred them.

The praises appear to have very real connections to the past.

In 1932, American Wilfrid Turnbull described the first Igorot policemen of the American colonial government’s Philippine Constabulary as “the reincarnation of their warrior ancestors tempered by discipline.”

Turnball, an army surgeon who became deputy governor of the early 20th century Mt. Province, wrote about the first Igorot policemen in a series of articles for an American magazine.

He said the Ifugao policemen “were both physically and in soldierly appearance the best uniformed men of the islands and would have attracted favorable comment anywhere in the world.”

The province’s constabulary “wore a special uniform in which the brass leg ornaments, loin cloth and turban of the tribe substituted the shoes, breeches, puttees and hat of the regular uniform,” Turnbull said.

“The uniform was smart, useful and appropriate, and the men took pride in this difference from those of the other sub-provinces; men and uniform reciprocating in showing each other off to advantage,” he wrote.

The early 20th century was simpler times for Igorot policemen, however. “In spite of [a] heterogeneous and constantly changing populace and of Baguio being the natural hiding place for criminals from other parts of the islands [sometime between 1901 and 1910], there was practically no crime and little disorder,” Turnbull said.

So the Igorot police force, overseen by the American-controlled constabulary, “balked at the rare necessity of even serving a warrant on other than their own people,” he said.

Today’s world is far more complex and violent, but entering the police force remains a career pursuit for many Cordilleran.

A good number of criminology students are Cordillerans because the police profession is associated with bravery and heroism, which are virtues of most Cordillera tribes, said Dr. Ariel Nimo Pumecha, dean of UC’s College of Criminology.

Allaga was a UB graduate, while Golocan, Carap, and Bilog were UC criminology graduates. Walner Danao was a UC education graduate.

About 65 percent of SAF members are from the Cordillera, which explained why many of the 44 slain commandos were from the region, said Supt. Jonathan Calixto, company commander of the police’s Public Safety Battalion in Benguet, who delivered a eulogy for the fallen Cordillera policemen.

Calixto said many Cordillerans enter the police force not because of incentives or the “badge of honor,” but because this profession is “the legacy of our ancestors who defended our land, our women, our gold against foreign invaders.”

“It’s important [for the Cordilleran] to be brave, to be a warrior, to be a good leader. We never leave our men behind. We fight until our last breath and we will die with honor in the name of service,” he said.

Tabdi and his brothers subscribe to this legacy. A survivor of the Zamboanga siege in 2013, Tabdi returned home intent on building a family before he took on other SAF missions.

His brother, Shagar, is also a SAF member. Brothers Alchin and Robin are training in Laguna while youngest brother Maiko said Tabdi’s sacrifice inspired him to become a policeman.

Carap, a native of Kabayan, Benguet, was Tabdi’s friend. Janet, Carap’s widow, said her husband had found safe ground but had returned to fight to protect his friends.

Kabayan Vice Mayor Gideon Todiano, a retired police superintendent, said he supported Carap through criminology school, and described him as a man who was “always ready to help anyone.”

Allaga was laid to rest at Sitio Patok in the village of Poitan in Banaue, Ifugao, beside their ancestral house where he spent his early childhood. It was a remote part of Banaue so pallbearers had to use an “allasiw” or “batawil” (bamboo cradle) to carry his flag-draped coffin as they traversed rice terraces.

Allaga, according to an uncle, spent his youth in the Benguet mining town of Itogon as his father was a miner in Antamok mines. Kodiamat, Golocan and Kiangan also grew up in Benguet’s Mankayan town.

Anniban was buried on Monday at the Tabuk cemetery in Kalinga. Last week, his classmates at the St. William’s College created a Facebook page, “Cyrus Anniban—Our Hero.” During his funeral, Anniban’s classmates wore white shirts that were printed with his picture. Reports from Vincent Cabreza, Jhoanna Marie Buenaobra, Kimberlie Quitasol and Frank Cimatu