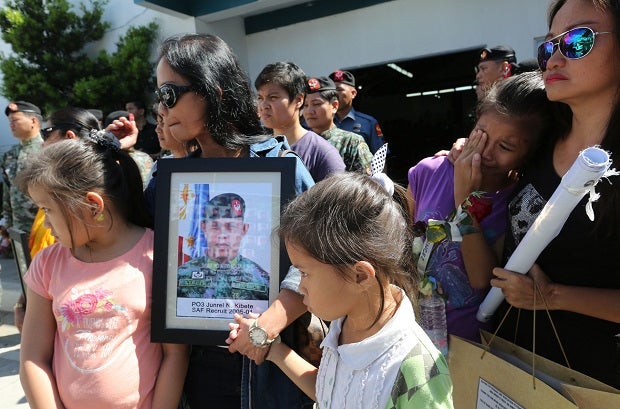 MANILA, Philippines — Widows, mothers and relatives of the fallen police commandos should be invited to the Senate probe on the Mamasapano incident to shed light on “the brave last moments” of their loved ones who were phoning them until the end, Senate Pro Tempore Ralph Recto said on Tuesday.

Recto said that the embattled Special Action Force (SAF) men, before they were killed, were still talking and texting to their relatives, some of them were even asking for cellphone loads.

“Yung iba doon humihingi pa ng cellphone load sa kanilang mga kamag-anak. Meron pang isang SAF, perhaps sensing the desperateness of the situation, sinamahan ng kanyang nanay sa pagro-Rosaryo,” the senator said in a statement. (Some were asking for cellphone load from relatives. There was a SAF member, perhaps sensing the desperateness of the situation, was joined by her mother in praying the Rosary)

“There were many who were pleading with their friends, relatives to convey to their higher ups their need to be reinforced and extracted, which unfortunately did not happen,” he said.

Recto said he came to know of these from the stories of the kin of the 44 SAF men when he attended the wake for them in Camp Bagong Diwa Thursday night.

“May ibang kamag-anak na nagsasabi na 2 or 3 p.m nakakatanggap pa sila ng text, contrary to reports that the firefight ended noon of January 26,” he said. (There were relatives who said that they received texts at 2 or 3 p.m.)

The senator said many relatives of those who perished in a 12-hour firefight with Moro rebels said they were in constant communication with encircled police officers until the latter ran out of battery power or cellphone load.

“Although there was no audio recording of the fight, the nearest that we have to a ‘black box’ are the text messages of these brave men and their conversation with their relatives,” Recto said.

“You want to piece together the picture on the ground at that time? Then we can get it from the persons they last talked to. It may not be the whole picture, some may just provide snapshots, but it will help investigators draw the scenario at that time.”

“I tend to believe that a great deal of the communication traffic out of the combat zone was not to their superiors or colleagues but to their loved ones,” he added.

Recto believes, however, not all SAF men were able to get in touch with family and friends in their time of peril.

“But for those who were able, then the Senate should invite without any compulsion whatsoever for them to attend,” he said. “I know they are still mourning. And we should respect their privacy. But for those who would like to share their stories then we should welcome them here.”

“What were our heroes last words? Sa text messages natin malalaman o sa kuwento ng kanilang mahal sa buhay,” the senator said. (We will know from their texts and stories to their loved ones)

“We need honest words, unblemished by political bias, that can take place only between the closest of kin,” he further said.