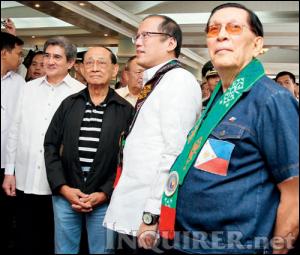 MANILA, Philippines—Even if they have no memory of that historic 1986 event,  young people born after that fateful year took part in the celebration of the 25th anniversary  of the Edsa People Power Revolution on Wednesday.

In the presence of President Benigno Aquino III, around 1, 500 students of the Rizal High School in Pasig formed a human banner, creating an image of a giant yellow ribbon at the school’s oval.

The students, waving and clapping their hands, wore yellow shirts with the message “Edsa Baby ako,” a tagline of the campaign of the YesPinoy Foundation to remind the youth of the uprising that toppled the dictator Ferdinand Marcos.

“This is a good time to relive the spirit of Edsa especially to those who were not able to witness that event that had changed our country,” actor Dingdong Dantes, founding chairman of the YesPinoy Foundation, told reporters.

“We have to be constantly reminded that Edsa 1 was a big part in our being a Filipino,” he added.

Dantes said the YesPinoy and the Edsa People Power Commission declared February 23 as the Edsa Youth Day. “It’s our responsibility to encourage the youth to remember the people’s unity that took place on Edsa ,” Dantes said.