Mamasapano: From peaceful community to land of conflict 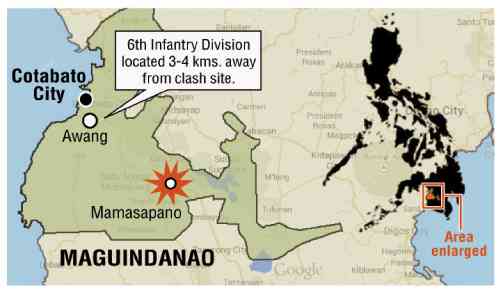 MAMASAPANO, Maguindanao—Though carved out of Shariff Aguak town in 1996, Mamasapano is supposed to be the mother of municipalities now controlled by the family of former Maguindanao Gov. Andal Ampatuan Sr.

Mamasapano used to be known as the Old Maganoy and the present-day Shariff Aguak was the “Townsite Maganoy” in pre-martial law years. The Old Maganoy, or Mamasapano, was a peaceful community of majority Maguindanaon Muslims with a minority Christian population.

Its founder, Datu Mamasapano Ampatuan, an advocate for good education, was the uncle of Ampatuan Sr. But unlike the former governor, Mamasapano was well-taught in old school and conventional politics, under the tutelage of his father-in-law Datu Piang, and his brothers-in-law who served the national legislature during the Commonwealth period.

The town has a progressive Christian community in Barangay (village) Nabundas in which Datu Mamasapano allowed Christian settlers to build a church, the only one in Maguindanao that is not subject of previous treaties that Spain had with sultans of Maguindanao and Buayan (upstream).

The other churches in the province, found in Sultan Kudarat, Datu Piang and Datu Odin Sinsuat towns, were covered by treaties signed with Spanish authorities by Sultan Qudratlullah Untong II, Sultan Matagmama Sa Barongis, and Sultan Muhammad Dipatuan Kudarat under the Lopez-Kudarat Treaty of 1645.

Though Mamasapano has had no history of being the site of gun battles, its creation was prompted by management of conflict among relatives, between the Aguak lineage of the Ampatuans and the Mamasapano descendants. Aguak, also known as Hadji Hassan, was the younger brother of Mamasapano, who was called Kagi Sa Bagong in their time.

During the term of Ampatuan Sr. as mayor of Shariff Aguak, he would not allow any of Mamasapano’s descendants to gain access to political power. He was once charged with and jailed for the killing of a grandson of Mamasapano, Unsek Ampatuan, in 1986.

It was reported that Unsek was killed for protecting the interest of his cousin Surab Abutazil, a local commander of the Moro National Liberation Front (MNLF), who wanted to run for mayor of Maganoy town, where Ampatuan Sr. was being groomed to be mayor in a family leadership succession plan that would fill the gap to be left by the expiration of the term of the then mayor, Datu Pinagayaw Ampatuan, an elder of the clan.

It was only after the killing of Unsek and Surab that Ampatuan Sr. agreed to separate a municipality for the children and grandchildren of his uncle Mamasapano. The mayoral post of the new town was first offered to Datu Mudi, but he declined.

When Ampatuan Sr. rose to power as Maguindanao governor in 2004, he had his loyal followers settle on idle lands that were either foreclosed by banks or were sold under the Marcos land reform law in the 1980s.

Ampatuan Sr. encouraged and would even loan his followers money to buy the pieces of property back from the banks, on condition that he would have the overall power of supervision, control and disposition over planting and harvesting.

The row over land starts a long story of conflict between the 105th Base Command leader and the Ampatuans. Indeed, Goma is instrumental in efforts to hunt down some of the still at large accused in the Maguindanao massacre, which Ampatuan Sr. and his son, Datu Andal, are charged with masterminding.

The Mamasapano patriarch worked in the Philippine Senate during the later bicameral period of the Commonwealth government in the late 1930s where his father in-law, Datu Piang, sat as legislator.

In World War II, he joined his brother in-law, Datu Gumbay Piang, in locally organizing the guerrilla movement that fought the Japanese army on behalf of Americans.

After the war, he sent his children, and encouraged children of his kin to go to school to avoid “becoming slaves of ignorance.”

Former Justice Secretary Simeon Datumanong recalled that the old man would give him 50 centavos in the 1940s, which he would spend on snacks in school, every time the old man visited the family of his older brother, Datu Alon, Datumanong’s grandfather.

One of the five sons of Shariff Ampatuan, born of different mothers, Mamasapano was said to be one of the earliest educated Moro rulers of his time. It is said that he had reaped his father’s political reward from the Americans for joining the local alliance of Moro leaders in waging what turned out to be the last war Moros fought against Spain in 1899.