Shock and sadness as Japanese react to ISIS beheading video 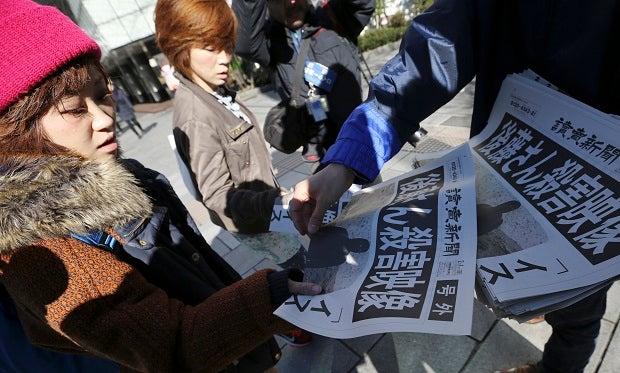 TOKYO, Japan — The news of a video purportedly showing the killing of Kenji Goto, a journalist held hostage by Islamic State militants, rushed through Japan early Sunday. Here are some voices and thoughts of ordinary people, Goto’s family and officials in a nation that has long held pacific views and where many were not emotionally prepared to cope with the hostage crisis, especially one that involved a reporter known for his coverage of children and the poor:

“It could have happened to anyone. I am terrified. Maybe an attack could happen even here,” said Tomoko Ogino, a 51-year-old cosmetics company employee, as she clutched a Yomiuri newspaper extra on the militant video being handed out on a busy downtown Tokyo street corner.

“It is horrible. It is crazy. The Islamic State is just a criminal organization, not even a real country,” said Hiroyuki Sakai, 66, a cab driver, who said he had heard the news on the morning radio broadcast.

“It is so sad, but Kenji has left us on a journey,” said Junko Ishido, 78, Kenji Goto’s mother. “Please forgive me for not finding any words.”

“I had been praying for his release, but God did not hear my prayers,” said Ekken Choh, 68, who works at a jewelry business. “All people are brothers and sisters. It is so pointless to kill.”

“They should have paid the ransom. This is about human life, and that comes first and foremost. We had to save his life. I want our country to first value human life. The fight against terrorism comes second,” said a 51-year-old volunteer, who only gave his first name, Masahiko, for fear of a backlash from a society that doesn’t favor outspoken people.

“We will never forgive the terrorists, and we will work with the international community to make sure they pay for their sins. Japan will not give in to terrorism,” said Japanese Prime Minister Shinzo Abe.