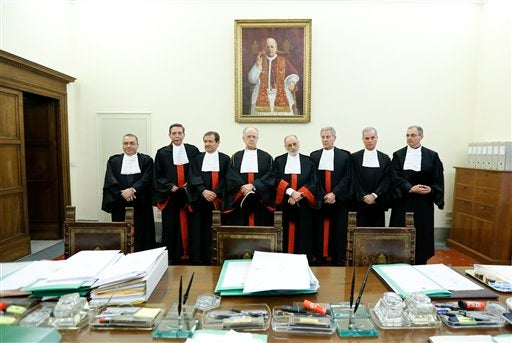 The chief prosecutor of the Vatican city state’s criminal tribunal, Gian Piero Milano, cited the two cases in a speech summarizing the tribunal’s work in 2014.

The Vatican spokesman, the Rev. Federico Lombardi, said one of the cases concerned the Vatican’s former ambassador to the Dominican Republic, Jozef Wesolowski.

The Polish-born Wesolowski was recalled from his post in 2013 following accusations that he had sexually abused young boys. Wesolowski has been defrocked and placed under modified house arrest inside Vatican City pending a decision by the Vatican court on whether to indict him.

In his speech, Milano referred to a separate case involving another Polish prelate who was convicted by the Vatican tribunal of fraud. Lombardi confirmed that the prelate was Monsignor Bronislaw Morawiec, an administrator at St. Mary Major Basilica, a Rome church where Pope Francis sometimes prays.