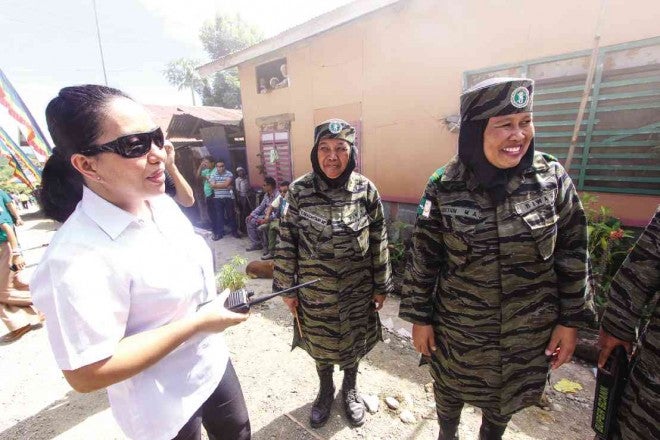 All the callers had one question: What happened?

Although there are many roadblocks on the way to peace, avenues have been opened for negotiations instead of gunfights.

One of these was the agreement on the cessation of hostilities that was signed on July 18, 1997, leading to the creation of the Ad Hoc Joint Action Group (AHJAG) on May 6, 2002.

The 1997 agreement was clear on what were prohibited: kidnapping, hijacking, piracy, sabotage, arson, bombing, grenade attacks, robbery, executions, unjustified arrest, torture, unwarranted search and seizure, and attacks on civilians and places of worship.

The agreement was also clear on another thing: Harboring criminals was a no-no.

The AHJAG was formed to enforce this agreement.

Capt. Jo-Ann Petinglay, spokesperson of the military’s 6th ID, confirmed that although there were problems in the earlier part of the peace process and in the implementation of the mechanism, it had been working smoothly in the past.

On July 6, 2013, government forces launched a major assault to flush out members of the Bangsamoro Islamic Freedom Fighters (BIFF) in Datu Piang town and in Barangay Ganta in Shariff Saydona Mustapha town.

On June 10, 2014, an operation was launched in Barangay Libutan to capture the suspect in the June 6 bombing in Datu Unsay Ampatuan town that killed a soldier and injured three others. A gunfight broke out during the operation, lasting for about two hours. The military reported that two suspects were killed and four others were arrested. A sniper rifle, improvised explosive devices (IEDs) and a van were recovered from the suspects, former 6th ID spokesperson Col. Dickson Hermoso said.

It was later divulged that the target in the operation was Basit Usman and among those arrested was his wife.

Usman was wounded but was able to escape.

But other factors led to Usman’s escape then, Petinglay said.

Petinglay said there were things beyond the control of authorities. “It can happen,” Petinglay added.

Sources said someone who saw the troop movement called up Usman and alerted him.

Petinglay, however, said the operation was still successful, despite Usman’s escape, because his cell was paralyzed.

The BIFF maintained at least 50 huts, barricades, trenches and posts with overhead bunkers inside the camp, Petinglay said.

An IED and documents on how to make an IED were found in the camp, Petinglay said.

These were proofs that the mechanism worked only if it was heeded, Petinglay said.

Jaafar has said these were speculations that would be clarified only through an impartial investigation.