More US ships arrive in Subic 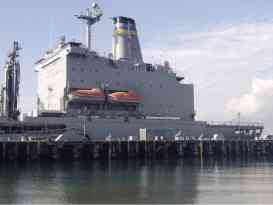 One of at least three US naval ships docked on Subic Bay for a routine visit that came after the filing of a murder charge against a US Marine for the killing of a Filipino transgender. ALLAN MACATUNO/INQUIRER NORTHERN LUZON

The replenishment vessel arrived for a routine port visit but seaport department officials did not disclose the number of crew members on board.

Two more US naval ships, the USNS Pecos and the USNS John Ericsson, arrived here this month for a routine port visit and to replenish supplies.

Rose Baldeo, president of the Subic Bay Freeport Chamber of Commerce, said the arrival of the three US ships was an indication that port calls to this free port have resumed.

Baldeo said many business establishments here and nearby Olongapo City suffered revenue losses after nine US ships canceled their port calls starting in November, after an American soldier was linked to the murder of a Filipino transgender woman.

Baldeo cited one restaurant owner who lost about P1 million after the restaurant stocked up on food supplies in anticipation of the “liberty” (rest and recreation) of American troops, a week after  transgender woman Jeffrey “Jennifer” Laude was killed in a motel in Olongapo on Oct. 11 last year.

It was during that time when some 3,500 US servicemen were barred from leaving their ships due to the investigation of Laude’s death.

The suspect in Laude’s killing, US Marine Pfc. Joseph Scott Pemberton, was charged with murder in December.