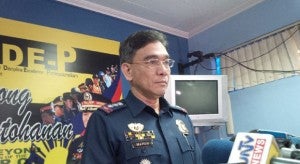 MANILA, Philippines—As the Philippine National Police deals with fallout from the botched Maguindanao operation that resulted in the tragic loss of at least 44 of its members, two key police officials have suddenly been relieved, but then reassigned to take over each other’s vacated position.

Chief Supt. Generoso Cerbo Jr. and Chief Supt. Wilben Mayor, acting chiefs of the deputy director for the Intelligence Office and the Public Information Office, respectively, started in their new assignments on Wednesday.

The reassignment was made “by command” of PNP officer in charge Deputy Director General Leonardo Espina, with authorization from the National Police Commission, as shown by an order signed by Police Director Jaime Morente, the head of personnel and records management.

The sudden exchange of posts came as the the PNP is confronted with the recriminations over the killing of at least 44 Special Action Force (SAF) members in what the government has described as a “misencounter” with Muslim rebels in Mamasapano, Maguindanao, last Jan. 25.

In an ambush interview, Cerbo and Mayor dismissed suggestions that their reassignment was related to the “misencounter.”

“These sorts of movement and personnel circulation happen regularly in the PNP… as part of career [advancement],” Cerbo said.

But asked why they were the only two police officials to be moved, and whether it was related to the SAF deaths, Cerbo simply said he didn’t know. “We weren’t part of the decision-making process,” he said.

He said he was “forewarned” of the movement on Tuesday evening.

Mayor said it could be that his and Cerbo’s “qualifications” and the fact they had formerly served in each other’s offices may have been one reason why the staff movement affected only the two of them.

“It may be because of our expertise. I was formerly in his office as the the chief of the Intelligence Operations Division, and he was the Public Information Office chief before,” Mayor said. Cerbo was the PNP spokesperson from 2012 to 2013.

“We just do our jobs based on orders. Wherever we’re placed, we do our best,” Mayor said.

Cerbo gave an assurance that operations in the two offices would continue smoothly despite the sudden reshuffle.

On Tuesday, the SAF chief, Police Director Getulio Napenas, was relieved of his post while an investigation is being conducted on the bloody clash between the SAF on one hand, and the secessionist Moro Islamic Liberation Front and the Bangsamoro Islamic Freedom Fighters.

The SAF men had gone to Mamasapano to arrest two “high-value” wanted terrorists when the gun battle, which went on for more that 10 hours, broke out.

Read Next
Cuba wants US to return Guantanamo before normal relations
EDITORS' PICK
SM continues to send relief assistance to remote towns in Batangas
‘House of Kobe’ launched in Valenzuela City hours before hoops star’s death
4 Ways Jollibee’s new store will serve a leveled-up kind of joy to Filipinos in the South
In appreciation: Kobe Bryant, a life defined by hard work
Get exciting deals and discounts when you download the new McDonald’s App
DOH warns vs eating raw meat, exotic animals amid coronavirus outbreak
MOST READ
Kobe Bryant’s helicopter flew in fog that grounded other choppers
Additional bill calling for ABS-CBN franchise renewal filed in Congress
Crews work to recover remains at site of Kobe Bryant’s crash
Reckless gambit
Don't miss out on the latest news and information.