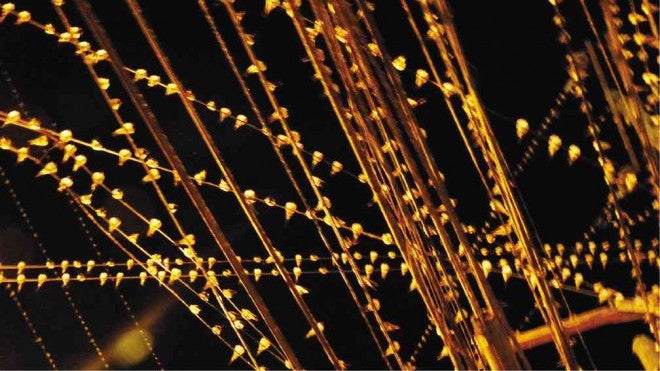 These birds may look like fiesta buntings or Christmas lights at night, but can be totally annoying once they start raining the streets of Batangas City with their droppings. FLORANTE CRUZ/CONTRIBUTOR

These little birds do not come just in dozens, but in hundreds of thousands, and not everyone’s quite happy about Batangas City’s frequent visitors.

Especially unhappy is the city’s general services office which is tasked with cleaning up the bird droppings off the streets and sidewalks.

Thrice a week, the city government sends out a fire truck and about 20 men to water spray and brush away the birds’ stains with organic disinfectants.

The Batangas city environment and natural resources office (Cenro) spends about P4,000 every two days to clean up the 1-kilometer P. Burgos Street, a busy commercial thoroughfare, which has become a favorite roost of the barn swallows.

“We noticed that they were nowhere in sight weeks before (Typhoon) “Glenda” (in July 2014). We thought they were gone for good. But after the typhoon, they were there again and even increased in number,” Gonzales said in a phone interview on Tuesday.

Cenro estimates about 250,000 swallows swarming the city every season.

To address the swallow problem, the city government consulted the University of the Philippines Los Baños Museum of Natural History (MNH) and the School of Environmental Science and Management (Sesam), which in November conducted a one-week study on the swallow phenomenon.

Their report was presented during the East Asian-Australasian Flyway Congress in December 2014 and was published on Jan. 22.

According to Cruz, the “urban roosting phenomenon” in Batangas occurs during the months of November to March, with thousands of the brownish birds, each the size of an average human hand, are seen perched along power lines, posts, trees and buildings.

“You’ll observe them from 6 p.m. and throughout the night. By morning, they’ll fly away to find food and return by dusk,” he said in a phone interview.

While “cute” to look at, Cruz observed residents propping up umbrellas or scurrying into buildings to protect themselves from the “downpour” of bird droppings.

Gonzales said aside from making the street slippery, the droppings also leave a bad smell on sidewalks and car windshields.

Most survey respondents felt that the swallow phenomenon has no direct effect on the businesses “and that there is already a degree of tolerance (for the birds),” MNH’s Gonzalez said in a statement.

However, he said, most people were unaware that birds carry fleas and gnats “which can cause human disease” while only 20 percent understood that migratory birds actually come from other countries.

“Could it be that the natural roosts of these voracious insect-eaters are so degraded that they are now thriving in the cities?” Or how “have they become accustomed to loud noises and (human) population?” he asked.

In other countries, Cruz said the birds are being poisoned to address a similar problem “but of course we do not do that here.”

Gonzales said while they saw no solution yet to the bird droppings, the swallow phenomenon would be part of the environmental code that Batangas City and Sesam is currently drawing up.

In the meantime, he said they were working to promote P. Burgos as a bird-watching spot to draw tourists to their city.

“We cannot drive them away. In fact, we prohibit catching or killing the birds,” Gonzales said.

He said their seemingly ungrateful guests have already been a part of their community. “Maybe they like it here because it’s not polluted. We’re just trying to look at it the positive way.”