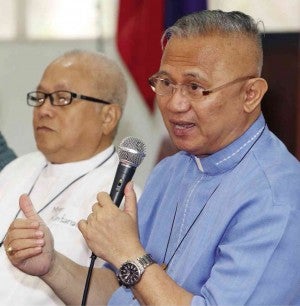 Politicians are the biggest obstacles to a people’s initiative to completely outlaw the use by lawmakers of discretionary funds, or pork, but Church officials said the campaign would hurdle these and push through with a signature drive to get the initiative on track.

“In principle, many of the politicians are really against the bill. There are many. They have a way of discouraging people to participate,” said Cebu Archbishop Jose Palma, one of the leaders of the campaign.

Palma and other Church officials said there was a low turnout in the signature campaign for the initiative in parishes in his jurisdiction.

On Friday, the Archdiocese of Cebu counted only 24,162 registered voters who signed the people’s initiative petition. This is barely 16 percent of the required number of signatures to get the initiative going.

Palma said volunteers in the field had been reporting that families who had children enrolled in schools as politicians’ scholars had refused to sign the petition.

Lack of education among parishioners, especially in poor areas, is also a factor in the low turnout, Palma said.

But he said the Church was not disheartened.

In the province of Cebu alone, at least 80 organizations are helping gather the signatures in the province’s nine legislative districts and the city of Cebu.

The People’s Initiative Against the Pork Barrel aims to collect at least 5.4 million signatures nationwide to pass a law, directly from the people, that will ban all forms of pork barrel, which has been described as the single biggest source of corruption and patronage by lawmakers.

The antipork barrel petition must be signed by at least 10 percent of all registered voters in the country and at least 3 percent in each congressional district.

“We have seen the reports. At the moment, we know we lag behind but we’re hopeful,” Palma said in an interview at Sacred Heart Center in this city.

Cebu Archdiocesan Discernment Group, which has taken the lead in unifying Cebu Coalition Against the Pork Barrel System, met with Cebu media for updates on the campaign.

Palma expressed dismay at the results so far. “I think there’s not much work done as expected,” he said.

Palma said that in other dioceses, the turnout was also not good.

“We are comparing notes,” he said. He said other areas, like Calbayog City in Samar province, strongly supported the initiative “but others are a bit indifferent.”

Palma recently issued a circular designating all 140 parishes in Cebu as venues for the signature drive.

Although the Supreme Court has already declared the Priority Development Assistance Fund (PDAF), or pork barrel, and the Disbursement Acceleration Program (DAP) unconstitutional, senators and congressmen continue to enjoy discretionary funds in other forms.

Under the proposed Pork Barrel Abolition Act, all budgets submitted to any legislative body shall contain only itemized appropriations, except funds for relief and rescue operations during calamities, and for intelligence work.

The proposed legislation also calls for the abolition of the Presidential Social Fund, which has also been described as a form of pork barrel. Violators would be banned for life from holding public office.