Most violent encounters between gov’t forces and rebels 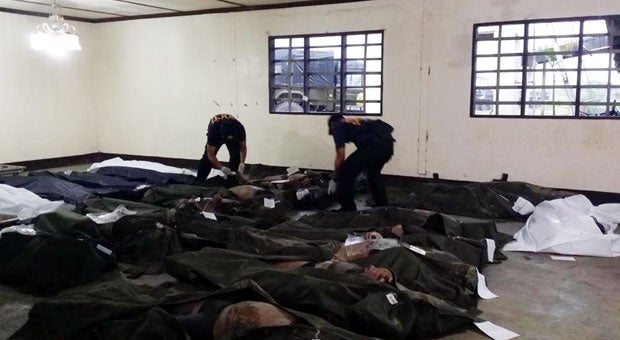 MANILA, Philippines–Several encounters between government forces and insurgents have resulted in heavy casualties on both sides as well as killings of civilians. Here are some of the bloodiest battles recorded in the past four decades:

Oct. 10, 1977—34 officers and men including Brig. Gen. Teodulfo Bautista were gunned down by Moro National Liberation Front (MNLF) in what came to be known as the Patikul massacre. An MNLF commander, Usman Sali, lured Bautista into a meeting in a marketplace in Patikul with a promise to talk about a ceasefire. According to accounts, Bautista was being greeted by a smiling Sali when a voice was heard shouting, “Dapa (Drop to the ground)!” As Sali did so, about 150 MNLF troops showed up and opened fire at the visitors.

Feb. 12, 1981—119 officers and men of the Philippine Army’s 31st Infantry Battalion just deployed to Pata island off Jolo were shot and hacked to death by villagers. The casualties sustained by the Philippine Army were the most recorded in a single encounter. The Navy and Air Force retaliated by shelling the island for almost two months. An estimated several hundreds to 3,000 civilians were reportedly killed.

Aug. 21, 2000—16 soldiers were killed when at least 30 New People’s Army rebels fired at a truck carrying 28 soldiers in Himamaylan, Negros Occidental province. One died later in a hospital in Bacolod City and seven others were wounded.

Feb. 7, 2005—13 Marines were killed when followers of MNLF leader Nur Misuari attacked Army posts in Panamao, Sulu province. Gun battles between the Moro guerrillas and government troops continued for more than two days, leaving as many as 40 soldiers and 30 guerrillas dead.

Aug. 18, 2007—15 Marines died while attempting to take over a major encampment of the Abu Sayyaf in Basilan. After almost nine hours of close combat, the Abu Sayyaf camp in Silangkum, Unkaya Pukan, was taken by government forces.

Aug. 12, 2009—23 soldiers, including two junior officers, were killed in a gun battle in Zamboanga province, the military’s worst loss ever in a single engagement with the Abu Sayyaf.

September 2013—20 soldiers and five policemen died while 194 were wounded on the government side in three weeks of fighting following an attack by armed MNLF rebels in the city of Zamboanga. More than 200 MNLF members were killed while 294 others were captured. Twelve civilians were killed, including four hostages, while 79 residents were wounded.–Inquirer Research

Sources: Inquirer Archives, Kasaysayan: The Story of the Filipino People