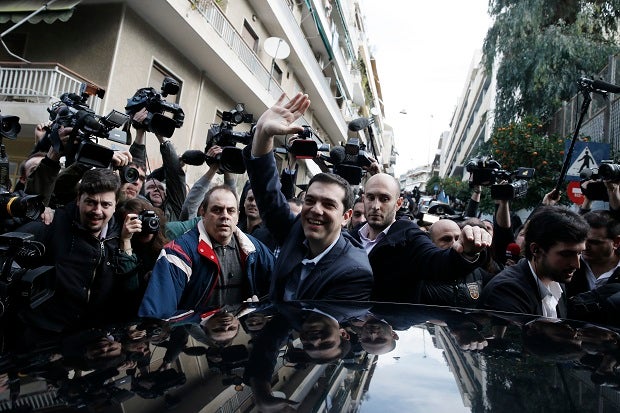 Alexis Tsipras, center, leader of Greece’s Syriza left-wing main opposition waves to his supporters after voting at a polling station in Athens, Sunday, Jan. 25, 2015. Syriza won after voting in an early general election crucial for the country’s financial future. AP

The party’s ambitions have already sent shockwaves through financial markets and the rest of the eurozone.

They have also alarmed Greece’s international creditors, who fear a Syriza government might default on its massive debt and turn its back on the terms of a 240-billion-euro ($269 billion) bailout by the European Union and the International Monetary Fund.

Here is a look at Syriza’s aims and the difficulties they could encounter:

How does Syriza propose to tackle what they call a “humanitarian disaster” caused by the demands of Greece’s bailout? They want to immediately raise the minimum salary from 580 to 751 euros ($650 to $840) a month. People working and those already retired would have a “13th month” of pension if their monthly pension is less than 700 euros. Coupons for food and electricity would be given to at least 300,000 households and people’s primary places of residence would be protected from repossession.

Other Syriza priorities include guaranteeing access to free medical care and scrapping tax on heating fuel.

The party believes the “emergency” plan will cost 12 billion euros ($13.5 billion) which they say they will raise from securing reduced repayments on the national debt, by re-directing EU funds, and by cutting tax fraud and smuggling.

The problem is that releasing these funds cannot be done overnight. Analysts at Eurobank believe a Syriza government would have “a very narrow margin for manoeuvre” and Greece could soon see its debt repayments climb.

Will Syriza’s victory poison relations between Greece and its lenders, the European Union and the International Monetary Fund? Syriza’s demands to write off part of the colossal Greek debt (which stands at 175 percent of GDP) combined with the proposed extra spending measures are certain to create tension between Athens and its creditors.

The party is also challenging measures demanded in return for the bailout by its troika of lenders — the IMF, the EU and the European Central Bank — such as freeing up the labour market to make it easier for companies to lay off staff.

German Chancellor Angela Merkel has tried to calm the rhetoric by talking of a need to “find solutions” and European diplomats expect both sides to try to find a compromise to avoid a “Grexit” — the exit of Greece from the eurozone.

Will Syriza’s policies put Greece’s place in the eurozone at risk? Syriza say they have no intention of leaving the eurozone. European officials have also gone to great lengths to put out the fire sparked by rumours from Berlin that it was making contingencies for “Grexit”.

Merkel said Friday that Greece must “remain part of our (European) story”.

Nevertheless, Goldman Sachs said “lenders are willing to pay the cost of heightened default uncertainty in Greece rather than provide funds for policies that reverse the reforms that have taken place and deviate from economic orthodoxy.”

However, Greece could also exit the eurozone “by accident”, according to former finance minister Ghikas Hardouvelis.

If it defaults on its debt repayments and the markets panic, it could trigger a bank run. A sudden surge in withdrawals by nervous Greek consumers would cripple the banking system.

The European Central Bank could then refuse to step in to help a Syriza government.

What are the implications of a Syriza government for the rest of Europe? Syriza’s success could boost other leftist European parties in Spain and France, which were quick to congratulate the party on its victory.

Leaders on the extreme left and right often see the pro-market European Union and its austerity measures as the root cause of the economic problems afflicting the continent.

“Hope is coming, fear is fleeing. Syriza, Podemos, we will win,” said the leader of Spain’s populist Podemos party, Pablo Iglesias, on Sunday ahead of the results.

Spain’s conservative Prime Minister Mariano Rajoy earlier Sunday warned austerity-weary voters against the temptation to back Podemos in elections due this year which some see as a possible re-run of the Greek vote.